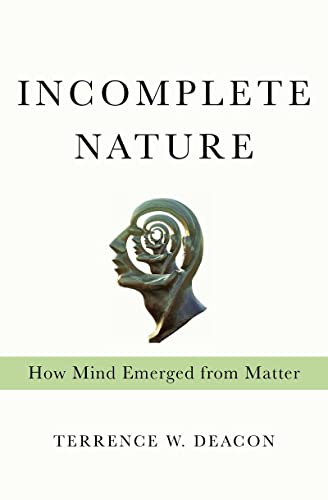 “. . . the elusive intangibles of consciousness, values, ideas, intent, anticipation may finally get properly linked to the organ they arise from, be measured and understood, which will bring humanity to its next level of development. Incomplete Nature gives scientists the groundwork to build upon; and, for the rest of us, a preview of what the future holds.”

This is a Really Big Book.

It’s big in size (600+ pages); big in concept (the missing link between mind and brain); and big in importance (if the author’s theory is right, then many avenues of scientific research will need to be remapped but will lead to a huge breakthrough).

The book also is big on vocabulary, so equip yourself with a dictionary before starting. Although Dr. Deacon writes carefully for the lay reader, so that anyone with a secondary education can follow his narrative, the subject requires complex words and sentences to explain. You will therefore need to read slowly and attentively. This is an educational tome, not something to kick back with on the beach.

(Note: Vocabulary won’t be a problem if your normal conversation includes such terms as heuristic, paradigm, and teleology.)

As well, Dr. Deacon coins new words to express the concepts he introduces—absential, ententional—but he defines them clearly, and they are just the right words to capture the ideas he presents. They work so well, in fact, that they’ll likely be adopted by scientists and philosophers debating the consciousness question, and be used in their future literature.

That said, Incomplete Nature is a laborious read, not only because of the weight of its content, but also because of how much the author repeats himself. Although each sentence is fresh and meticulously constructed, and each idea builds upon the previous one, Dr. Deacon conveys his ideas through multiple examples and makes sure no threads are left dangling. Then he backs up to summarize the ground he’s covered before moving on.

This is great if you don’t get it the first time, and it’s an established classroom technique that allows things to become clear for everyone in the audience, since sooner or later an example will come along that different mentalities can grasp. If you’re one of those who catches the idea right off, however, you’ll probably start skipping text until you find where it advances to the next idea.

The ideas are worth following because they make beautiful sense and account for so many of life’s paradoxes. For anyone hungry to understand the chasm—and often antagonism—between the sciences and humanities, Dr. Deacon shows why it developed and how the breach can be mended. He integrates what’s known and extrapolates, logically and plausibly, to explain how human sentience evolved from chemistry and physics. That is, how it might have evolved; this is still only a theory.

But Incomplete Nature is a masterwork by a neuroscientist who knows what he’s talking about; and he is honest when he moves into less certain territory. If only his editor(s) had stepped in and deleted the parts where he apologizes for himself!

He’s got a brilliant theory, yet he feels the need to “coax you to consider this crazy idea.” His clever and effective neologisms he calls “clumsy.” Et cetera. This is probably a reflexive cringing against an expected (or already experienced) harsh response from the orthodox scientific community, or perhaps a need for self-justification arising from academic conditioning against writing commercial nonfiction for commoners. Who knows.

Regardless, Incomplete Nature would work better without such self effacements. When he runs off unfettered, he’s confident and compelling, supports his statements like a pro, and never sounds kooky. Dr. Deacon is a man with a unifying vision who deserves to be heard with respect.

It’s hard not to respect someone who builds his case so thoroughly. Dr. Deacon leaves no molecule unturned in making sure he covers his points and constructs his argument on sound footing. This book’s content would, indeed, make a great textbook to build a classroom course around. Many readers might find the information more digestible that way. Dr. Deacon does pause now and then to translate scholar-speak into plain English, using everyday examples. These provide exciting “aha!” moments that spur one to press on. So while a solid science background isn’t necessary to follow the text, it would definitely help—otherwise you might feel like you’re hacking through a jungle with a machete, searching for the lost city of gold.

The treasure is there, buried among the polysyllables of the final chapter. But it’s actually a beginning instead of the end. Dr. Deacon has simply provided a huge blinking arrow pointing the way to fuller discovery. As he puts it: “It is my hope that this glimpse of another scientifically rigorous . . . way to view these issues will inspire others to explore some of the many domains now made visible.”

If fellow researchers grab the ball he’s tossing and run with it, then the elusive intangibles of consciousness, values, ideas, intent, anticipation may finally get properly linked to the organ they arise from, be measured and understood, which will bring humanity to its next level of development. Incomplete Nature gives scientists the groundwork to build upon; and, for the rest of us, a preview of what the future holds.