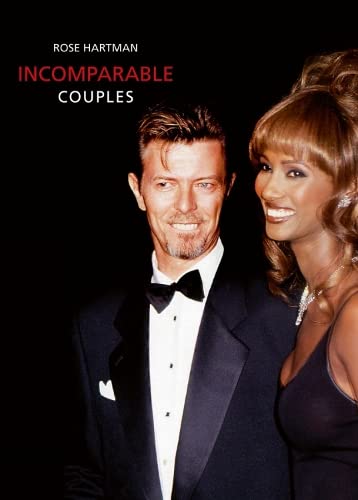 Incomparable Couples is a love note to New York City compliments of Rose Hartman. She offers us a scrapbook of sorts that chronicles so many “couples “who were part of what made New York City such a wondrous place—especially after dark. It is a compilation spanning the greatest and most social decades (1970s–1990s) of the city.

The most interesting fact about the book is the couples are not always couples in the truest sense. These are two people who have been photographed together in that split second when the shutter is clicked. Yes, some actually are couples and some are just serving as a memory of what was at that moment. Some may not even be known to you, but all of them share one thing in common which is that they caught the discerning eye of this legendary and ubiquitous photographer and have thusly been recorded.

It is of my opinion that this book would be most appreciated by readers who either lived through these eras or have a special fascination with New York City and its denizens of the night. The only text that accompanies the photos is its subject(s) names and the location information of each photo. To say that the focus is on the photo and its subject(s) is an understatement. The book will become an amazing reminder of New York City and will require many return visits for years to come.