The Iliad: A New Translation by Caroline Alexander 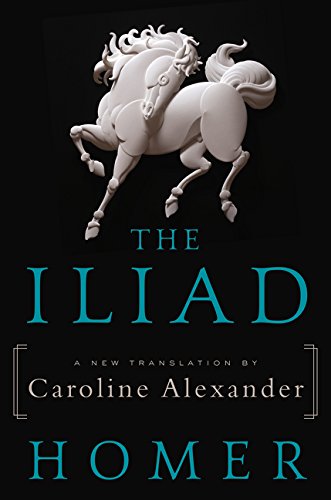 After ten years of war, soldiers have grown weary. The leadership now endures uncouth criticism of its policy, accusations of self-interest and self-aggrandizement become commonplace. The gods remain fickle, taking sides and influencing the ground game. Some things never change.

Despite its famous reputation as a classic, The Iliad is still relevant today. Homer's ur-text of war and honor will resound once again in this age of mediated war and endless nation-building missions to the Middle East. But The Iliad represents a pivotal creation in the annals of Western Literature. It is a rousing admixture of historical facts and mythological fictions. The historical reality was once again revitalized by the recent discovery of a warrior's grave in Pylos, Greece. The Iliad may be the first and one of the greatest military epics, but it was also about real people who were cut down in the heat of battle.

The action takes place outside the walls of ancient Troy (modern-day Turkey). The two main forces, the Greeks and the Trojans, are from a modern perspective geographic outliers. How European or how Asian The Iliad is depends on individual interpretation, political bias, and nationalist zeal.

As with every great work of literature, The Iliad has been translated numerous times. The first English translation was rendered by the Elizabethan George Chapman. The new translation by Caroline Alexander breaks the tradition of The Iliad being translated by men. The pertinent question for every translation is, “What makes this one different?” Alexander's translation preserves the line numbers with the ancient Greek. Her style is also simultaneously artificial and action-oriented. It reads like a performance. Artifice doesn't act like a deterrent to the sweaty, bloody action, but as a means to enhance the narrative. At times it feels like peering into the everyday rhythms and rituals of ancient Greece.

In her magisterial introduction, she explains the significance of The Iliad, not only from a literary and poetic perspective, but with an eye toward historical, cultural, and archaeological evidence. The action of The Iliad was ancient history to those who first listened to it in Classical Greece (fifth through fourth centuries BCE). The Trojan War (c. 1260–1180 BCE) would have seemed to Homer's audience as real as King Arthur's Britain to a medieval audience.

Alexander goes on to explain how Greece went through a cycle of cultural apogee and then descended into its own Dark Ages, riven by strife and illiteracy. Linear B vanished, eventually giving way to Ancient Greek. The Iliad represents a new flowering of literature in Ancient Greek culture. Her introduction also delves into related topics like whether or not Homer existed and whether Homer was an individual or a collection of individuals. Even though the topics are specialized, her prose can be easily handled by those who aren't Classics scholars.

The poetry itself sizzles on the page. Alexander writes with a verve that recalls, somewhat anachronistically, Viking sagas and Shakespearean drama. On other occasions, the repetitious metrical schemes recall the early cantos of Ezra Pound. Characters talking to each other in long monologues isn't uncommon. But those long monologues can contain family histories, description of rituals, and mythological legends. To the modern ear, it may sound artificial and the main narrative grinds to a halt. Yet they can contain stories within stories. To those crowded around Homer, it must have been mesmerizing.

The challenge with translating such a monumental piece of classical literature is to become too reverent or too fawning. Alexander respects the source material, but doesn't grovel before it. This presents opportunities for the translation to shine and be relevant to this modern age. Besides the noble monologues, there are cases of smack talk, boasting, and conniving. In the first book, Achilles dresses down the Greek general Agamemnon:

“Wine-besotted, you who have the eyes of a dog and the heart of a deer,

never do you have courage to gear up for battle with your people,

nor go on ambush with the best of the Achaeans;

to you that is death.”

This epic may be thousands of years old and the very foundation of the Western Canon, but it does possess many a sick burn. But the epic also contains a multitude of gut-wrenching moments. For every death there is a pocket biography, giving each fallen soldier a dignity and grace. Every warrior's life matters, no matter how small or far down the order of battle. When stripped of its hallowed reputation and viewed in the light of this barbaric age, where a mass shooting and a beheading with a chainsaw have become too commonplace, The Iliad represents a war story still relevant and meaningful. This is not the work for a specialist audience, but for all humanity.