If Then: How the Simulmatics Corporation Invented the Future 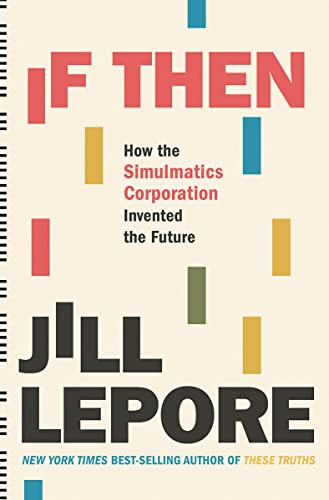 Jill Lepore, the Harvard historian and New Yorker writer, argues that a company you’ve never heard of “helped invent the data-mad and near-totalitarian twenty-first century.” Moreover, she does so in a remarkably well-written, exquisitely researched, and deeply engaging book.

Founded in 1959 by Madison Avenue ad man and huckster Ed Greenfield, Simulmatics—a contraction of “simulation” and “automation”—sought to use numbers and mathematical models to make human behavior predictable. It was “the Cold War’s Cambridge Analytica.” Staffed by scientists from MIT, Yale, Harvard, and so on, it applied the burgeoning mid-20th century power of computer technology to critical societal issues—from presidential elections to urban rioting to warfare.

Headquartered in midtown Manhattan with a summer office on Long Island in a geodesic dome built by Buckminster Fuller, the company achieved prominence in 1960 with the election of John F. Kennedy, whose campaign presumably benefited from its advice on how to debate opposing candidate Richard Nixon and the best position to take on civil rights. The advice was based on interviews and possible outcome scenarios.

That was a bold new approach then. “The machinery of American political campaigns above the level of dogcatcher is now run by companies like Simulmatics using algorithms,” writes Lepore.

In tracing how the firm sought to predict “If this occurs, what will happen? If this, THEN that,” the author describes how this colorful group of often-brilliant behavioral scientists advised political campaigns, targeted custom-fit advertising messages for consumers, conducted psychological research among villagers in the hamlets of Vietnam, and considered ways to prevent the spread of socialism in developing nations.

In a word, for the right price the company would simulate anything—from traffic patterns to whether physicians would prescribe particular new drugs.

Alas, the company’s results were often mixed and disappointing to clients (“Simulmatics failed,” says Lepore). Its importance lies in laying the groundwork for our present-day obsession with data that “manipulates opinion, exploits attention, commodifies information . . . and undermines democracy.”

In vivid thumbnail portraits, Lepore brings to life these mainly liberal intellectuals  determined to improve the world. Men of their male-focused time, they were ambitious and cocky, mistreated their wives, and often drank to excess.

They included such intriguing figures as political scientist Ithiel de Sola Pool, a child of generations of rabbis and a former socialist, who worked with Harold Lasswell and others at Stanford to play “Spot the Revolution” by studying words like “internationalism” and “security” in editorials of world newspapers to create predictive models; the “mesmerizing out-of-a-novel-by-Ian-Fleming” Eugene Burdick, bestselling co-author of The Ugly American whose 1965 novel The 480 told the Simulmatics story; and the legendary smoker/drinker Wild Bill McPhee, a brilliant mathematical sociologist.

By 1967, with a 50-member staff in Saigon, most of the firm’s one-million-dollar gross came from Defense Department work in Vietnam. Investigative journalist James Ridgeway called Simulmatics “nothing more than a dummy corporation through which [Ithiel] Pool runs his outside Defense work.”

Lepore must be the envy of many historians. Her research illuminates this decidedly obscure corner of recent American history and reveals the technologies and human foibles that helped shape our present. As in earlier books from New York Burning to the recent These Truths, her writing is consistently bright, lucid, and immensely entertaining. She can even be gossipy: in If Then, a New York psychoanalyst is “mostly famous for sleeping with patients.”

Simulmatics closed its doors in 1970. In its time, technology was limiting, says the author. Computers were slow. Models were weak. But there was more.

“The company’s behavioral scientists had very little business sense,” writes Lepore, “its chief mathematician struggled with insanity, its computer scientist fell behind the latest research, its president drank too much, and nearly all of their marriages were falling apart. The machine sputtered, sparks flying, smoke rising, and ground to a halt, its lights blinking, wildly, desperately, before going dark.”