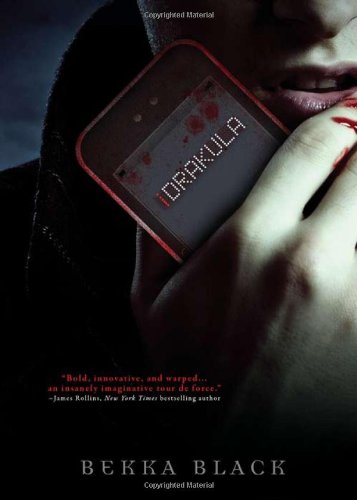 “He’s pale as a bone and looks older than anyone I’ve ever seen. His skin is all weird. It’s thin and wrinkly, like tracing paper that was rolled into a ball and then smoothed out. He also smells bad.”

That’s the description 18-year-old Jonathan Harker provides Mina Murray via email in the wake of his first meeting with none other than Count Dracula himself in Bekka Black’s fresh and groundbreaking young adult novel, iDrakula.

But we’re not talking about Bela Lugosi or Christopher Lee here. iDrakula is a reimagining of the Dracula legend, reinvented as a young adult tale via e-mail and text message exchanges. Interestingly enough, the original Bram Stoker 1897 classic was told in similar fashion, albeit through letters and journal entries. In that respect Black’s seminal retelling speaks to today’s gigabyte-obsessed youth in a language they will certainly understand and undoubtedly relate to.

R u there?
Of course. Are you feeling well?
Tired, but I think that’s only because I’m having trouble sleeping.
Why?

That exchange between Mina and Jonathan as he begins to fall under the count’s spell fills out a page dedicated to a smart phone screen complete with shaded boxes, dates, times, and even buttons. The structure imposes a kind of virtual reality over the pages in which the iPhone 4 effectively becomes the star of iDrakula. A book is supposed to speak to its audience, though, and in that respect it’s hard to envision an author following that rule in stronger fashion than Black. Indeed,iDrakula seems perfectly crafted for a generation for whom communication is primarily keyboard based, often exclusively keyboard based.

Otherwise,iDrakula pretty much sticks to the Stoker tale as the rest of us know it. There’s even the crazed Renfield, fresh off his own encounter with the count and now institutionalized for his nasty habit of biting the heads off rodents. That brings Harker to Romania where he seems on the verge of suffering the same fate as relayed through his texts and emails. That is until his batteries die, providing a blacked-out sense of isolation also unique to this audience and generation, the lives of whom are held hostage by their rechargers and power cords.

Traditional vampire fans will be happy to hear that wooden stakes still have their place in our digital world. Sure, such a structure preempts any pretense toward character development or typical teenage angst. And it also prevents the whole blood-sucking nature of iDrakula from otherwise becoming a kind of stoic metaphor for the detachment of a generation for whom sex is often no more passionate than hitting the SEND key.

But maybe that’s Black’s point; and she makes it in stunningly effective fashion. Too bad the count himself was too busy ferrying boxes of dirt to his cavernous Manhattan apartment to bother with an unlimited data plan that would’ve allowed him to better reach out and bite his pursuers. Gives a whole new meaning to the phrase “cat and mouse”—and there’s probably an app for that, too.