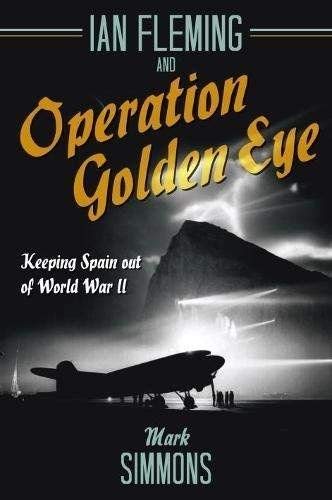 “Ian Fleming and Operation Golden Eye leaves no doubt that Fleming’s service during World War II provided him with all of the research necessary for his later career as a thriller novelist.”

The character James Bond is in the same elevated pantheon as Sherlock Holmes and Count Dracula. Movies, comic books, and even radio shows have featured Agent 007, the suave and dashing British secret agent. Bond is the symbol of mid-20th century machismo. Ian Fleming, the man who created Bond, lived a life not too dissimilar from his famous creation.

Ian Fleming and Operation Golden Eye by Mark Simmons is a concise rundown of Ian Fleming’s war. As an officer in the Royal Naval Volunteer Reserve and a member of Naval Intelligence, Fleming saw the secret, covert side of the British war effort, and the main thrust of this book looks at what Fleming and British intelligence did in order to keep Spain and Portugal out of the Second World War.

Simmons’ book is not about the blood and guts of battle, but rather about all of the backstage politicking that intelligence operators must do in order to accomplish their missions. In the case of Portugal, the British had an easier time convincing Dr. Antonio Salazar and his New State government to keep away from the Axis powers, even though Lisbon was swimming with Nazi agents in the 1940s.

Spain was a different animal. Because of heavy German and Italian support for Francisco Franco and his Nationalist army during the Spanish Civil War (1936–1939), Madrid felt some need to repay Berlin and Rome. However, thanks to the poor state of Spain’s postwar economy and the influence of British intelligence agents, General Franco kept his country neutral while the rest of Europe and North Africa burned.

Simmons tells his fascinating story with little adornment. The sentences are simple, sharp, and hardly longer than five words. Despite this, Ian Fleming and Operation Golden Eye is an enjoyable read chock full of great details. While Fleming is the main character in this slim volume, others important figures, both Axis and Allied, are described in full by Simmons.

Standouts include Admiral Wilhelm Canaris, the head of German military intelligence in Spain and the brave leader of anti-Nazi resistance within the German Navy; Alan Hillgarth, the novelist-cum-Royal Navy attaché in wartime Madrid; Admiral John Godfrey, Fleming’s irascible boss and the basis for the Bond character “M”; and Sir Samuel Hoare, the luckless British ambassador to Madrid between 1940 and 1945.

Another interesting side story discussed in this book is the formation of 30AU (30 Commando Assault Unit), a special intelligence gathering force created by Fleming himself. 30 AU saw plenty of action in Normandy, North Africa, Gibraltar, Sicily, and the Greek Dodecanese Islands.

Ian Fleming and Operation Golden Eye leaves no doubt that Fleming’s service during World War II provided him with all of the research necessary for his later career as a thriller novelist. Furthermore, this book highlights all of the hard work that British intelligence had to just to convince Portugal and Spain not to hitch their wagons to the German war machine. Although this effort is not as remembered or celebrated as the Battle of Britain or the Allied counteroffensive in the Ardennes, Simmons proves conclusively that the secret war in Iberia played an outsized role in the Allied victory of 1945.