I Knew You'd Be Lovely 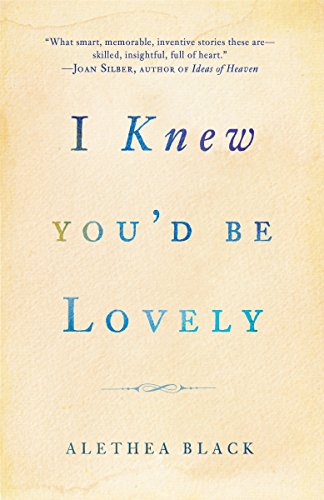 “I Knew You’d Be Lovely is an impressive offering, from a strong new voice, of stories about life’s desperation.”

Consider a formula for producing a promising new writer: the courage of Jane Mendelsohn and Emily St. John Mandel; the calm and precise voice of Maile Meloy; the microscopic focus of Joan Didion; and the world-weary irony of Roald Dahl. This just about sums up what you get with Alethea Black, the author of this new collection of short stories: a collection that stands up well alongside Meloy’s Both Ways Is The Only Way I Want It.

Meloy wrote about people who wanted more than they were offered in their life’s current circumstances. Ms. Black writes about people who are at the end of the dock, ready to jump into the water. They’re not sure that a change is going to improve their life; they know only that life cannot continue the way it is. Her stories take us to the point where each character is about to experience a major change. We’re never quite sure as to whether the change is for the better, as her characters have disdained the need to look before they leap. In a sense, she writes about people who have been driven to tears and near madness, either by their past imperfect actions or sheer inertia. Now, they’re going to improve their own lives even if it kills them.

Ms. Black writes on a very human scale, without exaggeration; however, as with Dahl, her stories are sometimes symbolic of both larger and smaller things. And, as with Dahl’s short stories, there’s often a sense of unreality just offstage—as if we’re going to be surprised by something unexpected at any second.

The weaknesses in this compilation might best be explained by analogy. If it were a record album, I would state that the songs were placed in imperfect order. And the weakest song (story) was selected for the title. Instead of “I Knew You’d Be Lovely”—a tale about a young woman who attempts to find the perfect birthday present for her boyfriend and comes up with something extremely unexpected —a better selection would have been the second of the 13 tracks (stories) which was earlier published in Narrative magazine: “The Only Way Out Is Through.” (On a bookshelf, The Only Way Out Is Through would sit well next to Both Ways Is the Only Way I Want It. Case closed.)

“Law school had been the classic intellectual sanctuary from certain practical considerations. Then it had ended, and he’d needed to make a living. So here he was.”

Despite a few minor issues, I Knew You’d Be Lovely is an impressive offering, from a strong new voice, of stories about life’s desperation. If Ms. Black has a fault it is that her coiled strength is never fully let loose. . . . There’s a sense of structure that’s a bit too quiet and organized (and intellectually proper) from this Harvard-educated writer who quite likely has the ability to “roar like forest fire” when she’s ready. Perhaps she’ll roar when she releases her debut novel.