I Have Something to Tell You: A Memoir 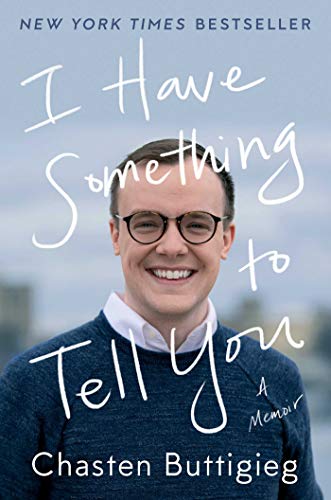 Chasten Buttigieg does have a story to tell and he does it well in his new book, I Have Something to Tell You: A Memoir.

Although his current claim to fame may have been as the husband of presidential candidate, Pete Buttigieg, his story is one of learning about himself—the challenges he faced throughout his life, and how he met those challenges and overcame them.

Born and raised in Traverse City, Michigan, Chasten Glezman grew up in a typical midwestern town to a typical midwestern family where homosexuality was not a dinner table topic. And yet he grew up sensing there was something different about his life, but not being able to totally wrap his head around that difference.

As he came of age in high school, he began to realize that, “I was starting to learn that I was gay. I witnessed a great deal of posturing and projecting from some of the people I grew up around, and I was rarely presented a different way of thinking, especially when it came to same-sex relationships.”

He spent his senior year of high school as an exchange student in Germany, where he learned that European standards were somewhat different from American standards and his self-confidence began to grow.

Buttigieg discusses his family, in particular his parents with love and affection. When he came out, “my parents never kicked me out.” His brothers were not as accepting, but he spends little time talking about the negative side of family relations. In spite of his anxieties about his sexuality, it can be said that he is a glass half full person, in part, due to the acceptance by his parents and grandmother.

Chasten discusses in some detail the steps he took through college and work to come to terms with who he was, and his comfort level inched up slowly, but surely. His first relationship with a boyfriend did not end up as he had dreamed it would, and yet in spite of an unhappy ending, perhaps this was fate.

Chasten completed his education and began doing what he really enjoyed—teaching. While the first part of the story is poignant about his acceptance of himself, it really takes off when he shares the time he shared with Pete Buttigieg, Mayor of South Bend, Indiana. By sheer chance, Chasten kept Hinge, a dating app linked to his Facebook page, and one day he “opened it up and saw a message waiting for me from someone named Pete.” It was a slow start, but both knew immediately they hit it off.

As the relationship developed further, they became a couple, and yet Chasten’s insecurities often rose to the surface as slowly, the political life began to form around him.

Not to be overlooked is the chapter when Chasten describes their marriage ceremony, and the multitude of decisions thrown before them. Although marriage is something Chasten always dreamed of, he soon learns that marriage is more than breakfast in the morning and dinner at night. This awakening occurs when Pete Buttigieg throws his hat in the ring for a run for the White House. And now here it is, the possibility of Chasten Buttigieg becoming the first husband of the United States. Something Chasten never glimpsed even in his wildest dreams.

The second half of the book looks at the world of politics and its effect on relationships. It is, at times, a confessional to how he grew; how he dealt with the potholes of politics; and how his insecurities began to shrink, and his self-esteem began to grow.

It is during the tumultuous political campaign that so much of his humor tumbles out. At sometimes his comments are a chuckle, or a smile, but there are a few moments when his humor is downright laugh-out-loud funny.

In particular, he relates a story about being invited to the White House where he describes the “cursed highlight was meeting Barack and Michelle Obama.” As the president arrived, Pete encouraged Chasten to nudge forward up the line. He describes the event as: “I was reaching my hand over the person in front of me to shake hands with Obama when a random guy barreled into me from behind. I turned to look at what had happened, and in the meantime, I felt a hand on my hand. I turned back around, saw Barack Obama was holding my hand, and immediately recoiled. About halfway into this maneuver, I realized what I was doing so I tried to recover by grabbing his pointer finger and shaking it. Like an infant. But not in a cute way! ‘Merry Christmas, Mr. President!’ I exclaimed, red-faced. ‘Yes,’ he replied, staring at my hand shaking his finger.” The scene goes on to even funnier imaginings in Chasten’s mind.

His role in Pete Buttigieg’s campaign took on a life of its own, and he soon became adept at standing in for the candidate when the situation called for it. He frequently found himself just wishing they could go home but knowing that was not an option. As the campaign went through its ups and downs, it soon became apparent that the end was in sight. And the decision was made, the staff was advised, and Mayor Pete made the announcement.

In the end, Chasten stays close to his students and encourages them to be themselves, in spite of any adversity they encounter.

It should be noted, that Chasten’s writing style is formed from his deep stretch into himself; as he discusses his insecurities, his anxieties, and how he comes to recognize and deal with them. He frequently uses parenthetical expressions to convey a sneaky sense of humor that grabs the reader when least expected.

Probably the most encouraging thing about this book is watching Chasten grow as a person; how he learns to be himself when faced with adverse situations; how he uses humor when he can and ignores situations when he must. Issues that came up during the campaign relating to hate mail, are especially significant in showing how he moved from curiosity, to anxiety, to guilt, to self-confidence and finally came to terms with who he is.

Throughout the book, Chasten shares so many stories about who he is and how he came to be here that it is impossible to talk to every one of them, but this book is a definite keeper.