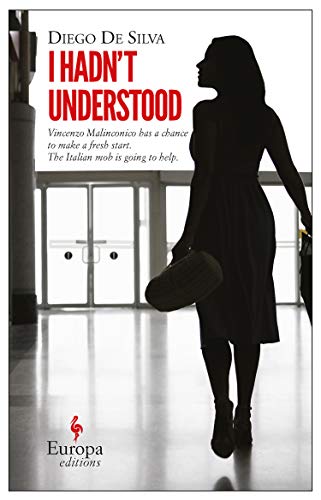 Vincenzo Malinconico (whose surname means melancholy), the protagonist of this rambling, comic novel, is a highly intelligent, introspective 42-year-old Neapolitan slacker attorney who avoids working to the extent possible (but to his credit shows up and makes an effort when duty calls).

He is also either the ex- or estranged husband to Nives, a clinical psychologist who is incapable of restricting to her office her professional proclivity to analyze every action and motivation—especially those of her nearest and dearest.

He is father to Alagia, a college student daughter wise beyond her years with whom he has a weekly lunch date at an airport Burger King so that Nives doesn’t know they eat junk food; and to Alfredo, a high school student and an aspiring journalist who interviews and then gets beat up by juvenile delinquents.

Vincenzo Malinconico’s very active yet wandering mind and his first-person stream-of-consciousness narration are prone to numerous digressions (including a chapter devoted to a close reading of the lyrics of two Gilbert O’Sullivan songs and another describing Italian pop music of the 1970s).

Some readers may lose patience with such digressions and wish Diego De Silva would get to the point, but other less directed readers will enjoy his well crafted monologues—including virtuoso page and a half long paragraphs in which Mr. Malinconico describes the details of his mental ruminations and ornery reactions to everyday frustrations.

I Hadn’t Understood is divided into 32 chapters, and the longer ones are further divided into subchapters. To appreciate Mr. De Silva’s narrative flow the book should not be read in snippets but rather in longer chunks.

Early on Mr. Malinconico describes himself as an unreliable narrator and later on describes his ambivalent relationship with reality:

“The thing is that reality mumbles. It expresses itself in incomplete sentences. And the translations that circulate are terrible, done by incompetents. Riddled with misreading, typos, entire lines missing. I make imperfect translations in an effort to get by until, one fine morning, I meet reality in the street—nonchalant, understated, never vulgar—and I stand there, rooted to the spot, staring as she passes me by and vanishes . . .”

The tone of the narration is alternately whiny and snarky, at times combining self-pity with a Woody Allen-like self-deprecation and at other times taking on a snobbish air of superiority, including a tedious tendency to drop the names of clothing and furniture designers.

The novel is set is present day Naples, but Mr. Malinconico’s gender attitudes (and sense of humor) are reminiscent of those of 1970s Philip Roth (except that the book’s sex scenes are less explicit than Mr. Roth’s), though to our protagonist’s credit he sometimes expresses self-critical incredulity at his sexist and homophobic thoughts and remarks.

Malinconico gets his big break when he is hired to defend Mimmo ’o Burzone, a member of the Camorra (Naples’ mafia). This tremendous professional opportunity both offends his morals and frightens him. On the one hand, if he wins the case he will enable a cold-blooded killer to go free, but on the other hand, what retribution will the Camorra take if he loses? He also has to study up on criminal law, a body of knowledge he’s hasn’t looked at since law school.

Around the same time he catches the eye of and begins a romance with Naple’s most attractive woman lawyer, Alessandra Persiano. The descriptions of the couple falling in love are tender and lovely. Amid the two lovers’ missed phone calls and messages Malinconico must also deal with Nives’ jealous live-in boyfriend.

But readers will find various plot elements less important to their enjoyment of the novel compared to Malinconico’s irreverent, odd thoughts, his sense of humor, and his wide-ranging and exploratory contemplations.

Some readers may see the book’s protagonist—highly educated yet underemployed, with limited means yet possessing highly refined and expensive tastes—as an allegorical figure representative of Europe’s imperiled economies.

But such a reading is probably a stretch for this largely interior novel. Kudos to translator Antony Shagaar for his superb job of rendering Mr. De Silva’s Italian into colloquial contemporary American English.