Before I Go to Sleep: A Novel 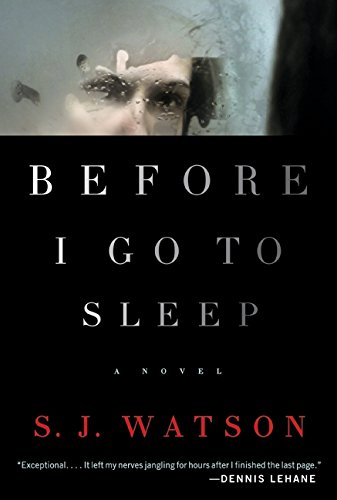 Memory is always a fascinating wellspring for writers, and loss of memory is even more bounteous, particularly in recent years. Right from the start, Christine Lucas’ panic can be felt in the short sentences, the unfinished dialogue, the neurotic pace—at being trapped inside a body that she doesn’t recognize and waking up beside a middle-aged man she’s never seen before.

S. J. Watson’s opening paragraph is almost cinematographic in style as it runs ’round the unfamiliar house in North London looking for clues. Christine’s voice here is in first person, present tense, as it must be, giving the story an urgency, a sense of immediacy as if it were happening as we read.

Christine is 47, but she believes she’s at least 20 years younger. Sometimes she believes she’s just a child. Every night, she forgets what’s happened the day before and has to be reminded by pictures stuck round the bathroom mirror—which is the first place she runs to in her panic—and by her husband and her neuropsychologist. She’s also writing a journal, and she has to be reminded of where it is every day.

After the initial hook of November 30th, the journal takes the reader back to November 9th, when Christine began to write it—and so begins the piecing together of her past, the gradual building of a whole person from a few shattered memories. It’s like an amnesic Groundhog Day, where everything has to be relearned over and over every 24 hours.

Christine’s husband, Ben, doesn’t know about the journal, neither does he know about the neuropsychologist, Dr. Nash, and she’s inscribed the words “Don’t Trust Ben” inside the book. She also learns that she’s written and published a novel and had a son, neither of which Ben has told her about. When she challenges Ben about their son, he tells her the boy joined the army and was killed in Afghanistan the year before. She realizes that she’ll have forgotten that by tomorrow and have to go through the grief again and again, and perhaps that’s why Ben keeps it from her.

The device of using the journal as a substitute memory is clever, as Christine can read about her past every day, as long as Dr. Nash telephones her and reminds her where the journal is, and convinces her he’s not some obscene caller, and doesn’t let Ben know he’s calling—a considerable feat in itself, and an unlikely one. Even though the shock of waking up in a strange place with a strange man should be the same every morning, Christine conveniently seems to accept her wake-up surprise more readily as the story progresses.

Ben tells her she was hit by a car and that’s what caused her memory loss, but Christine slowly realizes this is a lie, as little bubbles of memory begin to explode in her mind—but are gone again the next day.

Some of the words are American, like “potato chips,” “garbage,” “candy,” “Jell-O,” “strollers”, “cookies,” “diapers”, etc,. and, even though the book is set in London, this Americanisation of some of the text kept me imagining New York —it’s perhaps intended as exclusive to the U.S. edition and should make life easier for the American reader.

But the constant struggle for recollection begins to get a little exhausting by the middle of the book and, in the second half, the amnesia becomes increasingly practiced and the original creativity settles into something akin to a soap opera. The utterly soul-destroying repetition of the whole process of explaining the same set of circumstances over and over again is reflected in the narrative itself. The accumulation of memory from day to day has to be reiterated from scratch and then re-stated to Dr. Nash. This has the effect of slowing the pace to the level of constantly retracing one’s steps.

There’s some sexual chemistry between Christine and Dr. Nash, who’s 20 years younger than she, and this relationship is handled well and has the echo of a woman’s voice, the patience and lightness of a woman’s hand—even though the author is a man writing from a woman’s point-of-view, a rare enough phenomenon. It also has the effect of heightening the tension of the thriller element somewhat, with red herrings strewn along the way.

However, as the journal progresses through November, one increasingly keeps hoping the days would move a little faster, as the endless agonizing and guilt-trips and what-ifs and would-Is take their toll on one’s patience. I desperately wanted Christine to get her memory back, so the book could move on to another dimension. The level of detail includes wiping crumbs from a worktop and drying hands on a tea-towel and the cataloguing of these mundane details does not, as intended, lend realism to the milieu but merely slows the already flagging dynamic.

Eventually, Christine’s friend Claire turns up and it seems like the anaphora might be alleviated—but not so. Claire’s arrival leads to more agonizing, more repetition, more playback of what we already know, what we’ve been told over and over again. The journal ends on November 23rd, as Dr. Nash takes it for a while and, at the end of November, it’s back with Christine and this is where we came in.

The tension returns in the final chapter. The pace speeds up, the anticipation is high, the suspense is as tactile as it was in the beginning. The reader gets a sense of knowing what’s happening, almost as if it’s something that’s been read before, but forgotten—something there’s no memory of, even though there should be.

But then the contrived convenience of the climax lets itself down. The ending is as unsurprising as it is histrionic and ultimately disappointing.

As a psychological thriller, Before I Go to Sleep is more than adequate, but as a literary novel, it’s a book that promises much, but ultimately fails to deliver.