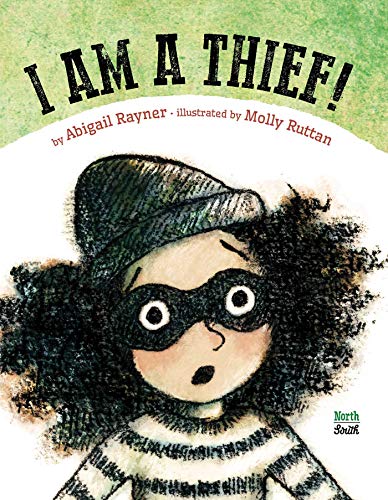 “I Am a Thief! is a cute picture book with an ambivalent message. In order to grasp the moral of the story, young readers will need guidance to ponder the possible consequences of theft.”

Eliza made a mistake. She took the gemstone from her classroom’s display and as a result, she suddenly is a thief. She struggles with her deed, yet she thinks, “The stone made me do it.”

She wonders how this could have happened to Eliza Jane Murphy? After all, she is a “Line Leader. Caring Friend. Captain of the Worm Rescue Team.”

Guilt presses on her, affects all her activities. “I was too heavy to swing.”

When the class notices the missing stone, Eliza’s cheeks burn, and she wants to put it back.

“But what if someone saw?”

At home she asks the adults in her family if they ever stole something. With the exception of her father, everyone she asks has stolen something in their past. Learning of the digressions of others provides some relief to her guilty conscience, but each adult also added that they gave the stolen item back.

Eliza envisions her disappointed classmates and returns the stone to her teacher the next day. The teacher calls her “brave.”

Eliza tells the teacher that she discovered that she comes “from a long line of thieves.” Rather confidently, Eliza adds that even her teacher probably once stole something.

The teacher, after thinking about it, tells Eliza, “Nobody is just a thief.” And on the following double spread we see Eliza in different identities, such as ballerina, older sister, friend, princess.

The humorous mixed-media illustrations depict Eliza imagining herself on a “Wanted” poster and show her relatives stealing various objects. The endearing illustrations helps us to feel for Eliza, especially since she immediately suffers from remorse and not even for a second does she enjoy the stone. It weighs on her, and when she hides it at home she even seems to “glow green” from the inside.

All goes well for Eliza. The classmates are glad to have the stone back, and there is no embarrassing class discussion or any other form of punishment.

We all make mistakes and hope for the forgiveness of those we hurt. We also are all more than the worst decisions we have ever made. That message will resonate with all readers.

But some readers might take issue with the book’s light way of dealing with Eliza’s digression.

The book leaves lots to discuss. Is it enough to just give the stolen object back? Shouldn’t there be a punishment? Who gets to decide if the thief’s guilty conscience has already provided enough punishment? Once a theft occurs outside of the safe space of a classroom in the care of a kind teacher, the thief may quickly feel harsher consequences.

Was there a discussion in class about Eliza’s choice? If so, it isn’t depicted in the book.

I Am a Thief! is a cute picture book with an ambivalent message. In order to grasp the moral of the story, young readers will need guidance to ponder the possible consequences of theft.