I Am Not Who You Think I Am: A Novel 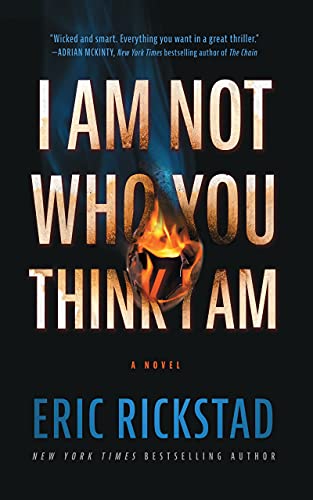 “When Wayland becomes convinced that he’s witnessed some sleight of hand—that the death he witnessed was not his father’s but someone else’s—his passionate defense of the theory is based on the mysterious message he’d found.”

I Am Not Who You Think I Am is titled with the words that eight-year-old Wayland Maynard discovers in his father’s handwriting after he sees his father kill himself. Or is that what he’s actually seen? With age and maturity come questioning, and soon Wayland has a set of alternatives he’s desperate to prove and explain.

A child’s view provides an ultimately unreliable narrator, and at first, Wayland’s first-person narrative reveals the affection between his parents, and a possible weakness in his father. “I have pieced together enough to know that what happened on the day of the Incident was not done because he was a bad man. A bad father. It was done because . . . well, we’ll get to that. This isn’t some magic trick where the secret machinations are kept hidden. No. This is all about the reveal. The truth.”

But which parts of the child’s memories are relevant truths? Is it the tall threatening man who visited his father’s barber shop? “My father’s shears nicked my ear. I yelped. Blood trickled from my notched flesh. My father didn’t notice. His eyes were locked on the figure in the doorway. Dead leaves danced around the stranger’s feet. I felt a chill from the air that carried the tang of autumnal decay.”

Though Rickstad declares this novel to be a new direction for him, the vivid portrayal of place and threat will be familiar to those who’ve read his other books, like The Silent Girls. The tale quickly complicates as Wayland begins to share his investigation with Juliette, who sets his adolescent hormones and perceptions spinning and who is at least as strange and prone to vanishing as his family.

When Wayland becomes convinced that he’s witnessed some sleight of hand—that the death he witnessed was not his father’s but someone else’s—his passionate defense of the theory is based on the mysterious message he’d found. And he poses the most critical issue: “Q: If it wasn’t your father, where is your father now? A: I don’t know. But I’m going to find out. Find out what they did to him.”

Some of the answers seem to be in the hands of the town’s most wealthy and reclusive citizens, and Wayland places himself in extreme danger trying to discover the secrets he knows they are keeping from him. When the final twist arrives, it’s not just Wayland who will be shocked—and the mood of love mingled with deception never lets up for a moment.

Rickstad makes it clear that it took both The Story Factory and the unusual tilt of Blackstone Publishing to allow him to swerve into this powerful diversion of narrative and suspended disbelief. Three more books are promised. Which should be, in fact, as good a return on investment as young Wayland will get for his desperate investigation.