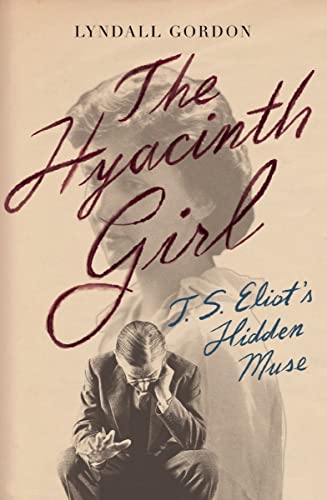 “Gordon’s purpose has been to call attention to the vital role that women played in Eliot’s personal life and his development as a writer.”

In The Hyacinth Girl Lyndall Gordon takes the reader on a painful journey through the tormented psyche of T. S. Eliot. She guides us with an insightful explication of the often obscure correspondences between Eliot’s poetry and his personal relationships with women, particularly his first wife Vivienne and his distant and beloved muse Emily Hale. Her analysis is based largely on the trove of letters Eliot wrote to Emily over a period of nearly 30 years between 1930 and 1957. This archive, housed at Princeton University, became available to scholars in 2020, 50 years after Emily’s death. Eliot destroyed all but 18 of Emily’s letters to him in 1963, two years before he died.

The letters reveal a side of Eliot—yearning, passionate, adoring—previously hidden from public view. Gordon explains how Eliot’s devotion to his muse Emily is expressed in his poetry through a subjectively coded language directed at her. We see the human face of Eliot that he concealed behind a mask of diffidence, hesitation, and reserve.

Though Gordon gives sensitive and plausible readings of Eliot’s poetry, clarifying its evasiveness with illuminating references to his complex and stifled romantic entanglements, the Eliot who emerges from her account is neither admirable nor likeable. As he turns Emily into a self-object, he appears alternately fussy, prissy, demanding, intolerant, cowardly, self-righteous, self-centered, and fatally indecisive. His frequently expressed tenderness toward her seems ghastly, fleshless, and ruthlessly repressed. His feelings for her, though apparently genuine, he redirected into his poetry, sublimating them in the service of a higher purpose. Never mind that this aesthetic project denied both of them happiness in the one life they were given to live.

Amply documented with biographical details, Gordon’s book reads more like a drama than a conventional biography that follows a chronological path. She builds the drama around character studies of five people—Eliot, and the four women who loved him and orbited around his sun over the course of his long poetic career: Emily; his first wife Vivienne, Mary Trevelyan; a churchgoing friend who fell in love with him; and Valerie Fletcher, his second wife. The stories of these four women overlap in time, and Gordon circles back to them at different stages of their relationship to Eliot. This weave reveals how Eliot used them according to his needs of the moment. In one way or another, Eliot manipulated all of these women, and Gordon’s sympathies clearly lie with them, although she shows compassion for Eliot’s personal failings and admiration for his literary genius.

Eliot was born in 1888 in St. Louis, an unlikely starting point for the child of a New England Brahmin family who would become the chief exponent of modernism in English literature. He was born with a congenital double hernia that limited his physical activity and disposed him to avid reading. He also suffered from abulia, a mental condition marked by hesitation and indecisiveness. These two defects would shape both his character and his poetry.

While a student at Milton Academy near Boston, he met Emily Hale, who would become “the hyacinth girl,” the muse with whom he shared his poetic imagination. When they met, he was 17, she 14. After matriculating to Harvard University, Eliot in 1914 was awarded a scholarship to Oxford University in England. Before leaving, he told Emily that he loved her, but made no mention of marriage, putting her in a state of uncertainty about their relationship. She would remain in this state for the next 43 years while Eliot zigged and zagged about his intentions.

Eliot had been writing poetry since he was a teenager in St. Louis. In 1910, while in Paris, he wrote “The Love Song of J. Alfred Prufrock,” a poem that came to the attention of Ezra Pound. Pound immediately saw Eliot as a vehicle for his theory of Modernism and gave him encouragement and friendship. “Prufrock” reveals Eliot’s inner state. At the age of 22, he sees himself as an old man to whom the mermaids will not sing. This image conveys Eliot’s sense of physical incapacity and his exclusion from the possibility of delight in the physical world. It points him toward a life of the spirit.

Eliot decided to remain in England in order to advance his poetic career. He believed English culture was more conducive to his literary ambition than America. In that regard, he saw himself as the heir of Henry James. Perhaps to prevent waffling over this decision, Eliot hastily married Vivienne Haigh-Wood, a woman he had met in London’s literary circles. Eliot wrote to Emily, explaining the reasons for his decision. But he realized it is Emily whom he truly loves. She appears, veiled, in his poetry.

His marriage was unhappy from the outset. Eliot failed to perform satisfactorily in the conjugal bed and felt ashamed. To produce income, he took a job as a schoolmaster outside London. During his absences, Vivienne lived with Bertrand Russell, who bedded her. Eliot later learned of this betrayal.

Unable to meet their living expenses on his salary, Eliot begged for financial help from his father. Vivienne was chronically ill, and ran up medical expenses. Eliot suffered a breakdown and went to Switzerland for treatment. These were the circumstances under which Eliot’s most famous poem, “The Wasteland,” was written. Following its completion, Eliot had a brief affair that left him with a deep sense of sin. He vowed celibacy and was baptized in the Anglican Church.

As Vivienne’s physical and mental health went into a steady decline, Eliot distanced himself from her emotionally. When Emily came to England in 1930 to spend the summer in the Cotswolds with her aunt and uncle, she contacted Eliot and they met for tea. Seeing her, Eliot was overcome with emotion. He wrote her reaffirming his love for her. He asked her to join him in a spiritual partnership that would bond them and find expression in his poetry. Emily agreed to accept this role, knowing that Anglican doctrine prevented Eliot from divorcing Vivienne. Thus Emily became “the hyacinth girl.”

In 1934 Eliot became friends with Mary Trevelyan. They attended church together, and socialized frequently. She was a nurturing figure, sympathetic to Eliot’s sensitivity and emotional frailty. He was then legally separated from Vivienne, so there was no possibility for scandal attaching to their friendship. Mary initially did not know of Emily’s role in Eliot’s life. She fell in love with Eliot, but faced the same conundrum as Emily: Eliot was a married man.

In 1938 Eliot contrived with Vivienne’s brother to have her committed to a private asylum. They found psychiatrists who would certify her insanity. Eliot had lived in fear of her molesting him psychologically. He wanted to eliminate the possibility of ever seeing her. His role in her incarceration added to the burden of guilt of carried because of his various sins against divine grace. The tangle of his relationships with these women found its way into his writing, especially his plays, such as The Cocktail Party. Gordon skillfully deciphers the characters, clarifying their real life counterparts.

Vivienne died unexpectedly, of heart failure, in 1947. Eliot was now free to marry. Mary and Emily were both expectant. But Eliot recoiled from marriage, telling Emily that his art required solitude. Their correspondence continued, but became more impersonal.

Valerie Fletcher entered Eliot’s life in 1949, when he hired her as his secretary at Faber & Faber, where he worked as an editor. As a girl, Valerie had become enamored of Eliot’s poetry, and set herself on a course to have a role in his life. She was 22 years old. Eliot was now in fact an old man, physically infirm with emphysema and an irregular heartbeat. He was also an international literary celebrity, having won the Nobel Prize for Literature in 1948.

After working several years for Eliot, Valerie told a mutual friend that she wished to marry him. The friend passed this information along to Eliot, who promptly wrote Valerie a marriage proposal letter that began with the salutation, “Dear Miss Fletcher.” Emily, learning of the marriage, wrote them a letter of congratulation and said she hoped to meet Valerie one day.

It remained for him to arrange for disposition of his correspondence with Emily. Their letters contained details about his private life that he did not want Valerie to know. Emily had arranged through a friend who was a professor at Princeton to deposit his letters there. Eliot insisted on an embargo of 50 years from the last date of their deaths. This would ensure that Valerie would never read the letters. Emily wanted her letters to him also deposited at Princeton, so that future scholars could easily see how their relationship had informed his poetry. But because Eliot now wanted to expunge Emily from the story, he had her letters burned. And he wrote a letter disavowing his love for her.

Gordon unravels this complicated story in a most artful way. She arranges the events judiciously, timing the revelation of the key twists and turns brought on by Eliot’s manipulations for maximum dramatic effect. In doing so, she brings biography to the level of tragedy, and repositions Eliot’s legacy as a poet and a man. Gordon’s purpose has been to call attention to the vital role that women played in Eliot’s personal life and his development as a writer. An unfortunate byproduct of her tale, for Eliot, is that he appears unworthy of them.