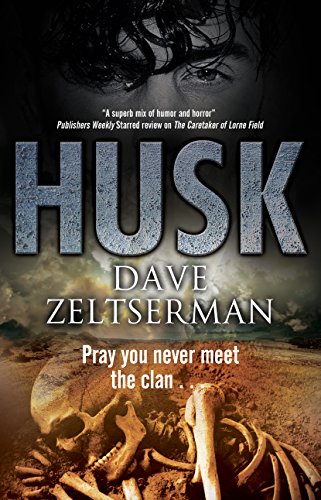 Charlie Husk is not like other boys. Charlie grew up in the deep, dark woods of rural New Hampshire. He was 28 when he first used a cell phone, surfed the Internet, and smoked a joint. Now in New York City, Charlie is surrounded by sensory overload. Adding to this unease is the fact that Charlie is a cannibal.

Husk by David Zeltserman is an unusual fish-out-of-water story. The beginning sees Charlie looking for meat (see: human victims) at a rest area located on the Massachusetts Turnpike. There he sees Jill Zemler get into a heated argument with her boyfriend Ethan. Charlie plays the dashing hero and offers Jill a ride back to New York City. During the drive, something very bizarre happens to Charlie the cannibal: He falls in love. Charlie begins to see Jill as a person, rather than just another animal. He quickly discards the burlap bags and ropes that he keeps in his kidnapping van.

The majority of Husk is about Charlie’s new life in New York with Jill. Here Charlie works as a dishwasher in order to make enough money to buy a fake birth certificate and Social Security card. Here Charlie murders and drinks the blood of Russian gangsters in order to quench his hunger for human flesh. Here Charlie finds that marijuana helps to dull the lust for the red stuff.

Frankly, the only meaningful thing that happens to Charlie in New York (besides Jill, of course) is the fact that he runs into a cannibal clan of scrap dealers in Brooklyn. These fellow cannibals try to talk Charlie out of abandoning the cannibal lifestyle, but Charlie is too smitten with Jill to listen. This decision costs Charlie, as members of his New Hampshire clan find him in the Big Apple.

Despite its horrific conceit (America is swimming with ancient cannibal clans), Husk is not frightening in the least. This is also no suspense or mystery here, as it is obvious that Charlie’s clan will not just let him go full human in New York. The only gruesome moment comes when Charlies slaughters the gang of Russians in Brighton Beach. The rest of Husk is surprisingly dull.

Charlie, the book claims, is capable of changing his appearance. With a more fearsome visage, Charlie can scare the crap out of people and make them do his bidding. Charlie also hints that the cannibals have been on Earth longer than humans. However, the true origin or design of the cannibal clans are never fleshed out, and Charlie says at one point that they are humans who can be taught not to eat human flesh.

Whatever the answer, Charlie and the cannibals of this novel are not terribly interesting. Husk is less about them and more about the difficulties of a lone weirdo trying to make it in the teeming cesspool known as New York. Beyond this obvious narrative point, Husk meanders towards an expected, yet unfulfilling conclusion.