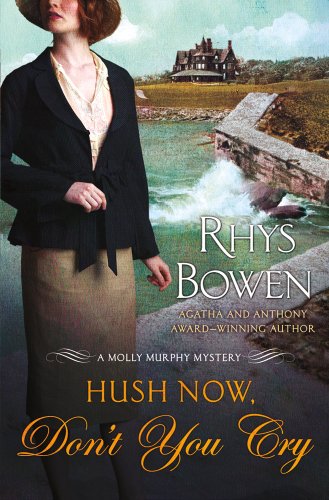 “In the hands of an author with less flair, this cliché could turn tedious, but Rhys Bowen has an eye for historical detail and an engaging tale to tell.”

It is a fiercely stormy night when Molly and her husband, New York City police captain Daniel Sullivan, arrive in Newport, Rhode Island, for their honeymoon. Cold, wet, and tired, when they finally get to their cottage, Molly is sure she sees a ghost at the big house on the estate.

In the hands of an author with less flair, this cliché could turn tedious, but Rhys Bowen has an eye for historical detail and an engaging tale to tell.

The two are in Newport at the invitation of Alderman Brian Hannan. He wants a state senate seat and would be happy to use his connections at Tammany Hall to get it. It turns out the alderman has also invited his family to the cottage, but is killed before it is clear why they are here alone with Molly and Daniel. Is he expecting familial troubles?

Luckily, for the reader, Daniel gets pneumonia from the storm, leaving Molly free to solve the crime.

The real mystery in the series is why Molly married, let alone to Daniel. He seems so dull; no sparks are created between them. Love is still an odd reason to marry in 19th century New York, where matches are commonly made on the basis of social mobility.

But Molly doesn’t need to marry. She relishes solving cases and enjoying life with her bohemian friends (bohemian being code for gay). They are a lively bunch, some attached, some not. So Molly has proof life can be navigated on her own. She earns enough money to keep a roof over her head and has a mind of her own. She lost a child but doesn’t seem to pine for another chance at motherhood.

Her ongoing battle asserting her independence from an overprotective and boorish fiancé, now husband, is puzzling. But author Bowen leaves that fracas for another book, because Daniel is well out of this one.

Molly can canvass the family; and as an outsider she can ask questions that no official would get away with. It’s easy to rile up the brother Joseph, who wants to take over the business; and the other brother is now a priest: Father Patrick. Other relatives float around the estate at night—possible assignations? And what’s with that ghost?

Rhys Bowen paints an engaging picture of Newport: from the salt air to the picturesque town. During her investigation, Molly goes back to New York and the clatter of city life contrasts nicely with the pleasures of a long walk by the ocean.

Now, if we could just find out what would happen if something were to happen to Daniel. . . .