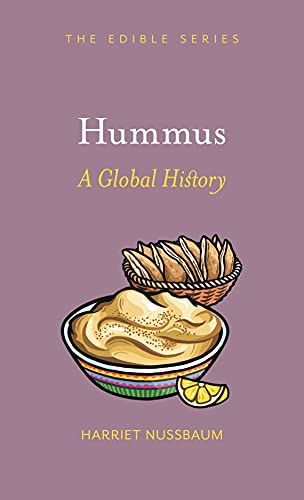 “Hummus: A Global History is a must-read for anyone interested in food culture. Readers will find Nussbaum’s little book on hummus to be a delicious treasure trove of facts and figures.”

Hummus may be the latest food fad, but this dish has a long and ancient history rooted in medieval kitchens of the Near and Middle East.

The history behind this delicious and nutritious snack is a fascinating subject explored in the pages of Hummus: A Global History by renowned food writer Harriet Nussbaum.

A simple combination of cooked chickpeas, tahini, lemon juice, and salt has become a worldwide phenomenon in recent years, and Nassbaum’s interest in hummus began as a young child.

The author was introduced to hummus by her parents who had studied in the Middle East and had a fondness for the food from that part of the world. Over the years, Nussbaum loved the grainy and fridge-cold taste of hummus of her childhood, but it was only later in her early twenties she discovered the creamy chickpea dish. When she moved to Egypt for a year of language immersion, she discovered the Egyptian dish koshari, a carbohydrate-rich mixture in which the legumes are combined with rice, pasta, and lentils, and accompanied with crispy fried onions and a spicy sauce. When Nussbaum moved back to England, she found hummus was a popular dish in many restaurants and cafes.

“I ate in Levantine restaurants where hummus was almost invariable served in the same way—scraped around the edge of a small red clay bowl, garnished with olive oil, paprika and parsley, and served with flatbreads and pickled vegetables.”

She was fascinated by the versatility of this dish.

“Virtually every grain and vegetable will work with hummus. To continue to call it a dip is simply an injustice. Hummus is a great source of plant-based protein, carbohydrates, healthy fats and abundant minerals. It is a staple for our times, and, luckily for us, it just so happens that it also tastes delicious,” she writes.

Nussbaum’s love of hummus has translated into an interesting read. The word hummus or houmous comes from Arabic meaning chickpeas. The cultivated chickpea is an edible seed from a small flowering plant known botanically as Cicer arietinum. This plant has two types: desi or kabuli. Desi is native to South and East Asia and has smaller and darker seeds, while the kabuli is native to West Asia and Mediterranean region and has larger lighter-colored seeds.

This book is part of the small The Edible series but don’t be fooled by the size of this small purple book, because it is packed with detailed information. Nussbaum delves into the history of the plant, and how the chickpea became combined with tahini, lemon juice, and olive oil over the centuries.

Soaking the chickpeas overnight and then cooking the legumes is the traditional and preferred method of making hummus. But do the skins of the chickpeas need to be removed? Yes, Nussbaum writes, or maybe no, if that is your preference. Turns out hummus is a forgiving dish and while removing the skins produces a smoother hummus, it is not necessary.

Does hummus belong to any one culture? For a while the ownership of this iconic dish was a dispute between Israel and Lebanon. Lebanon’s efforts to trademark the term and dish was unsuccessful and, in any case, Nussbaum writes, hummus many have been prepared initially in the urban centers of the Ottoman Empire (long before hummus found its way to the table of the rulers of Damascus or Beirut).

These are just a few tidbits of history and facts found in this book. Nussbaum has also shared several recipes for hummus as well an extensive references and bibliography. This is a must-read for anyone interested in food culture. Readers will find Nussbaum’s little book on hummus is a delicious treasure trove of knowledge, history, and facts.