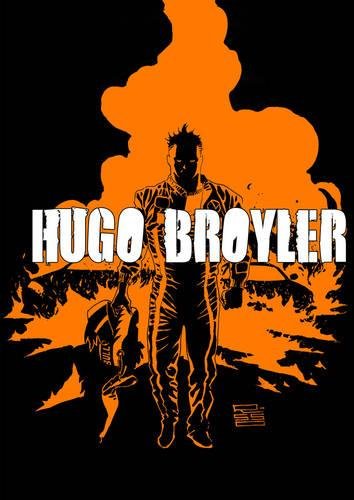 “The art is top notch, and the writing is excellent.”

"I just got out of debt with a criminal warlord. I'm not gonna hop back in bed with him just because some psychotic aberration from a car wreck told me to."

Hugo Broyler takes the reader into the future sporting world of static-levitation racing, the most popular and most dangerous sport of the day. Racers compete with cars that levitate above the track, giving them speed and maneuverability that NASCAR could only dream of. Unfortunately, that means an accident and death rate that can quickly take out the best of the best.

That's where the title character, Hugo Broyler, comes in. The former frontrunner in the racing circuit, Hugo was sidelined by a brutal crash that left a fellow driver dead, and Hugo's confidence shattered. But unable to sit idle and be forced into retirement, Hugo comes back to the circuit, ready to prove himself once more.

It does not turn out well for him. Instead of racing back to the top of the circuit, he crashes and burns again as an unknown force, in the form of a haunting voice in his head, takes control of his body and nearly kills him and another racer.

It only goes downhill from there for Hugo. Out of luck and out of money, Hugo is forced to get into bed with some unseemly characters in future Miami's criminal underworld. They want him for his driving skills; he wants them for their money and clout so he can get back onto the circuit. But it is much more complicated than signing on the dotted line.

Filled with plenty of action and a great premise, Hugo Broyler is a mix between Blade Runner and Miami Vice. The art is top notch, and the writing is excellent. It is easy to tell that the creators know their crime fiction tropes while also having plenty of room for science fiction inventiveness.

However, the combining of the first four issues of the comic book series is not the only highlight of this paperback. The creators have used the second half of the book to include a detailed guide to the world of static-velocity levitation. A brief history of the sport and the conglomerate that created it is included as well as descriptions and bios of each major racing team and their star drivers.

While this would be excellent bonus material on its own, it is merely a supplement for the RPG (role-playing game) that makes up the bulk of the bonus half of the book. Full rules on how to create a team, join an already created team, create a car, and create a character are included as well as step-by-step instructions on how to run a race. There are even tiles that can be copied and cut out so players can make their own tracks right there on the game table.

The writing and art alone should entertain readers, but with the bonus material included, Hugo Broyler should be on the to-read list of graphic novel and RPG fans alike.