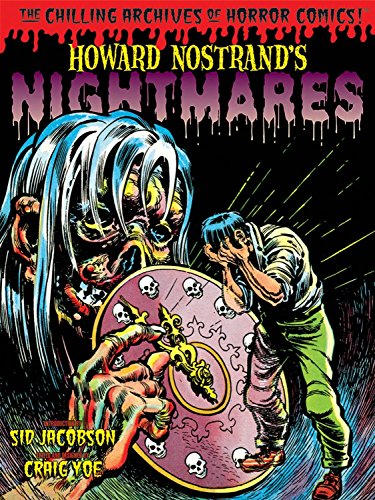 The backlash had started in the late forties. Thanks to a couple of magazine articles by Dr. Frederick Wertham and a few crusading organizations, the cry went out across the land that comic books were corrupting minds and destroying youth.

The entire movement reached critical mass in 1954 with the publication of Wertham’s own Seduction of the Innocent and the Senate Subcommittee Hearing on Juvenile Delinquency which actually focused on graphic crime and horror comics of the day.

Howard Nostrand’s Nightmares by Howard Nostrand and edited by Craig Yoe features horror, crime and sci-fi stories that were first published in 1953–1954. These are the stories that appeared about five minutes before the bottom of the comic industry almost fell out.

Unlike Wertham and the Senate Subcommittee, Yoe’s collection of Nostrand’s work features stories that are fun, true classic American art and serve a purpose beyond self-promotion and hubris incarnate.

The stories are mostly classic, pre-code horror. They feature zombies, witches, ghouls, ghosts, murder, and tales of loss at sea. Each are populated by vengeful, jealous, and horribly selfish, short-sighted people who all eventually suffer the consequences of their behavior. Which stands to reason as this style of stories was very popular in the early fifties.

Nostrand came to the genre after a few years studying and working as an assistant to more established artists. It was clear to all that this was a new guy who had chops. He was freelancing when a friend had recommended him to Harvey Comics.

At the time the company was publishing some horror but were mostly working in new stories from newspaper strips such as Joe Palooka and Blondie. Recently Harvey had just picked up the license to cartoons from Paramount’s Famous Studios such as Casper the Friendly Ghost and Baby Huey. But such family-friendly fare was not exactly selling for the publisher yet. That would take another five years or so to start to catch on at the newsstand. When Nostrand showed up, Harvey was just trying to stay afloat.

As Nostrand’s editor Sid Jacobson says in his foreword, he looked around and saw the “. . . the only company in the business who knew what they were doing was EC Comics.” At the time EC Comics was having incredible success with horror titles such as Tales from the Crypt and Vault of Horror.

These stories often featured horror and art that was created by some of the best in the business. Yes, it was occasionally gruesome art, but it was never gratuitous, and it was almost always served what had become the traditional EC twist ending. In addition the stories were written with a sense of detached humor about the proceedings. Many in the comic industry felt that the stories which appeared under the EC banner were among the best in comics.

When Nostrand arrives at Jacobson’s office the editor sees a natural talent. He also realizes that Nostrand’s line is very similar to one of EC’s most successful and respected artists Jack Davis. Comics, like many industries such as film and television, has no qualms about copying what is successful. It is only natural for Jacobson to ask Nostrand to work in a style as close to Davis’s as possible.

In some ways the horror that Harvey and a few others published during this time is like comparing the Monkees to the Beatles. Yes. One is a slavish imitation of the other. But the songs that the Monkees played were still written by Carole King, John Stewart, Neil Diamond, and Harry Nilsson.

This is Tin Pan Alley comics mimicking the best in the business. Howard Nostrand may be mirroring Jack Davis, but even taking that into consideration, his work is mighty, mighty impressive.

The fact that Jacobson realized Nostrand could write as well and allowed him to pen some of these stories makes the man’s skill even more amazing.

Editor Craig Yoe has gathered much of Nostrand’s work during those two years at Harvey. In his introduction he also includes art that Nostrand did for other companies. There is a cover to a board game that so clearly mimics MAD and Alfred E. Neumann that the nerve at the heart of such work makes you laugh out loud while also admiring the skill.

After a color section Yoe has included quite a few pages of Nostrand’s original art. Reprinted in clear black and white, Nostrand’s line actually becomes more terrifying yet remains utterly delightful and charming.

This is perfectly demonstrated in a five page tale, The Rift of the Maggis. The story is unadulterated fun that becomes even more gruesome as it goes on. It is the Vaudevillian template of the Battling Bickersons one step removed from an acid trip.

The Maggis are a married couple. The woman takes pride in her hair curler, the man in the accuracy of his watch. As they battle they each destroy the thing that the other loves. Each buys a replacement for the other. The last two panels feature a horrifying electrocution and then an explosion that removes the husband’s head.

It is ugly and exactly what the Senate would and did so vocally despise.

But Nostrand’s line, his commitment to the art, and the obvious relish that he put into his punchline leaves you laughing.

When he needed to Nostrand was able to tug at heart strings just as well. The last panel to the sailing story A Vision Saved Two Ships features a stoic sea Captain manning his ship as the specter of true love hovers over his shoulder. It is a chilling ending to a sad, sad tale.

This is a wonderfully horrific and funny collection that got lost in the brilliant spotlight that historians shine on EC Comics. It is a rich river of bloody fun.