How the Word Is Passed: A Reckoning With the History of Slavery Across America 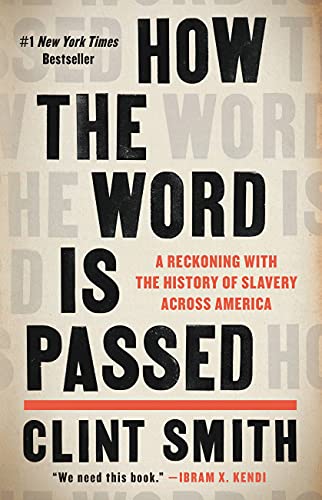 “reveals the real life of the enslaved Africans.”

We live in a strange period when truth is under fire from those who would deny reality. For four years, the leader of our country espoused alternatives to truth on a daily, or even hourly, basis. He espoused a perverted view of authenticity in a corrupt effort to substitute his personal fantasy for reality.

Although he has departed the White House, his influence has not diminished. Among other things, state legislatures around the country have enacted statutes that prohibit public school teachers from instructing their students about the history of race and slavery in America. Their edicts have not yet banned or burned individual books. If they do, the first book they would outlaw is How the Word Is Passed by Clint Smith, a magnificent nonfiction retelling of America’s battle with itself over race and slavery.

Clint Smith is staff writer at The Atlantic. He is the author of a full-length collection of poetry, Counting Descent, which won awards in 2017.  Smith writes about slavery and racism. He takes us on a tour of eight sites to reveal the story of how Americans stole millions of African people from their homelands and enslaved them throughout the generations.

As a poet, Clint Smith is a graceful writer. Historians rarely have his gift for language. For example, his chapter on a plantation begins: “Between the wooden white fence and the red brick path where I stood, there was a plot of earth where the dark heads of fifty-five black men sat on metal stakes.” It is beautifully written, lyrical, and poignant. His affecting narrative continues throughout his entire project.

Smith starts with Thomas Jefferson’s Monticello. Our third president owned hundreds of men and women, including Sally Hemings, the mother of six of Jefferson’s children. He freed only his children upon his death. The other slaves he saw as chattel to be sold. This chapter is the perfect example of America’s self-contradiction. The author of the Declaration of Independence was a slaver who would market his slaves to cover his debts.

Smith moves on to visit two more plantations and reveals the real life of the enslaved Africans. There were no benign owners. Slavery was a system operated by white sociopaths that was vile and malevolent. Smith tells a story of violence and brutality based on using the bodies and the minds of stolen people. At times, Smith’s writing sounds like a travelogue, much as could be found in a book about Nazi death camps.

Eventually, Smith completes his circuit with a visit to a Civil War graveyard, the Galveston site of the announcement by a Union general that the slaves had been freed years earlier, New York City where enslaved Africans were abundant, and Goree Island in Senegal, the departure site of slave ships. Each chapter is filled with revelations about a sorrowful time in the nation’s history.

That tragic time, regrettably, is not over. As young Black men are repeatedly murdered in the streets, Americans white and Black feel revulsion. Those who feed off white supremacy will learn that this country will not be trampled by hate or fear. We shall overcome our legacy.