How to Survive a Natural Disaster 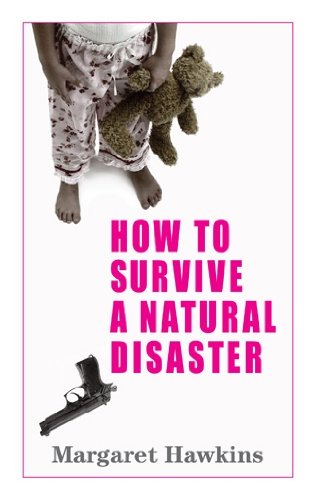 Margaret Hawkins is a Chicago writer and art critic. She has contributed to ARTnews and Chicago’s WBEZ public radio station. She also had a long-running column in the Chicago Sun-Times. She has worked as a businesswoman, taught art, and been an independent curator. She currently teaches writing at the School of the Art Institute of Chicago. Hawkins’ first novel, A Year of Cats and Dogs (2009), was well received.

How to Survive a Natural Disaster is a dark tale of mental illness, guilt, and forgiveness that unfolds via the narration of six central characters. Margaret Hawkins uses the narrators’ differences in personality and perspective to give multifaceted accounts of events surrounding the adoption of May into the family of Roxanne and Craig, and the issues that arise when May finds a loaded gun in Craig’s washing basket.

Each of the six narrators in this novel is damaged in some way. May doesn’t speak until she is seven and develops an unhealthy attachment to her big sister, April, who in turn is both obsessive and precociously brilliant. Their mother, Roxanne, is very needy and dependent. She is constantly trying to make the world fit her view of it. She resorts to denial and religion to help her negotiate daily life and sees adoption as a way of fixing her life. Craig is in a relationship with Roxanne largely against his will, or at least against his better judgment. He is a recovering alcoholic with a string of women behind him who becomes involved with Roxanne almost by accident and then finds it too hard to leave, especially as he grows more attached to the kids.

The remaining narrators come from outside the immediate family. Phoebe is a neighbor who struggles with obesity and agoraphobia. She is very much an observer of incidents as they unfold and provides support to the family, particularly May, when required. Mr. Cosmo is Roxanne’s three-legged Weimaraner, who seems to spend most of his time at Phoebe’s house. He is a truly independent observer. Like Phoebe, he is essentially outside the family and is able to see things that perhaps those more closely involved would miss.

Structurally, the use of six different narrators works well to give a holistic view of events. We are not just privy to a single opinion; we can make up our own minds about the situation based on a variety of evidence. The drawback to such a large number of storytellers is that the action takes a very long time to unfold. Given that the novel is barely 200 pages long, and that the backstory takes up 150 pages of that, there are questions about the rigor of the storytelling and just what it is that Hawkins wants to say.

Thematically, the key issues are that of guilt and forgiveness. The extended indulgence in backstory at least gives the reader a fairly clear picture of where each character is at as the climax approaches. Each of the central characters has his or her own reason to question their actions and choices in relation to the final outcomes, and each response appears valid. As such, each carries a measure of guilt and must find a way to forgive himself or herself as well as others.

Ultimately, How to Survive a Natural Disaster promises much but fails to deliver on many levels. That is not to say that it is a bad book. It is a mediocre book that, with some attention and reworking, could have been a good book. The language is appropriate, the characters all seem to have their own voice, the plot is resolved, and emotion is generated.

Yet something is missing. More effort could have been put in to broadening the scope of the work, to challenging the reader, or to presenting something new. Instead, what we get, while palatable, is something we have had before, and it is not our favorite. Many readers will enjoy parts, if not all, of Hawkins’ second novel. Others will be left a little hollow and bereft, unsatisfied by what could have been.