How Strange a Season: Fiction 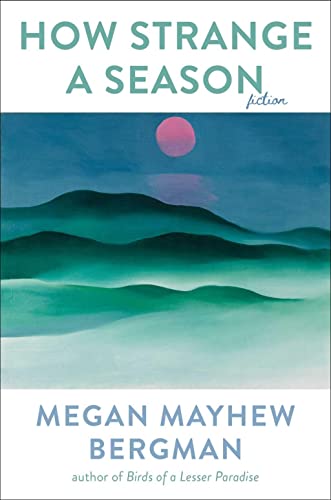 How Strange a Season contains six short stories and a novella plus a seventh short story that follows the novella and could have been included in it.

The short stories are not tales as such, not stories with beginnings, dramatic arcs, and endings, or stories in which the characters change to some degree because of what happens to them. Rather, they are portraits. They are sketches of women somewhere in their thirties. They have all had experiences that have given them some shape, some form, they are distinct. Yet they are not fully formed. The artist has not fully defined the curve of the mouth or positioned the pupils in the eyes.

In “Wife Days” Farrah is living a pampered life in which she treats her face to serum made from neonatal fibroblast, no-drag swimsuits, and a personal trainer. There were some years in her youth when she traveled with her mother’s rock band and a rough summer in Europe, but in the end her grandmother came through and her husband made life even more comfortable. She swims, she wants to win, that got her the best mate and admiring looks from other men, and women. “She and Blake belong together. They don’t need children. They just need each other. How can she help him see that?”

The women in these stories generally come with fashionable names. In “The Inheritance” the protagonist is named Hayes. She inherits a glass house on a cliff overlooking the Pacific from her grandmother, though this story focuses more on the man who took care of the yard, and other things, according to the man’s wife, for her grandmother.

The one story in this collection that aims at a traditional form in which a character changes over the course of the tale is “Peaches, 1979.” It is about a woman running the family orchard she has taken over, now failing in a drought, with a substory of a serial killer running around the area who could be the always-in-trouble brother. The symbolism of orange spray paint marking off dead peach trees that starts the story is used at the end the mark literally: her sister and ex-lover/hired hand found in a farm wagon now become dead to her. At the end, Darcy says, “‘Just how wrong would it be to save myself?’ She wondered, looking up at the watercolor sky. ‘And only myself?’”

The novella is titled “Indigo Run” and comprises roughly half the book. There are three major issues with the story. It moves around time in a random fashion. Chapters 1 and 31 are specified as taking place in 1954; the others are not clearly marked and make for confusing reading. For example, in chapter 7 one of the characters is driven to the plantation house in a car. In chapter 9 “toothless confederate veterans peeled potatoes and rendered lard” with no signal of a time shift. (And admittedly, the two could be consistent, but with low probability.)

In addition, much of the language is somewhat trite and not particularly revealing of character or situation.

“Marie knew both the mistake at hand and that she would make it. She could see—only for seconds at a time—her fault logic, as if looking over one’s shoulder at a familiar face in a crowd only to lose it again.”

Unlike the short stories that precede the novella that take time to portray its characters, the people in “Indigo Run” are one dimensional, and the reader cares little about what happens to them over the course of their lives, lives that are not terribly eventful. Few high points, few low points, not much, and little to care for.

Overall, the collection of stories and novella are disappointing after Bergman’s Birds of a Lesser Paradise. In that collection there were moving and insightful stories of women’s interactions with nature. The characters were different, each with a distinct vibe and voice, and the reader wanted more of them. Unfortunately, the same is not true of this collection.