How Sex Became a Civil Liberty 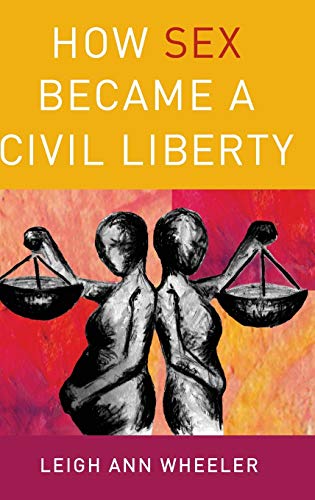 “Who would have thought a book about the ACLU could be so titillating?”

At first glance How Sex Became a Civil Liberty does not seem intended for a general audience. Think again.

Who would have thought a book about the ACLU could be so titillating?

This book presents an interesting discussion from a unique perspective of the reasons behind the ACLU’s adoption of positions that affect our lives today, delving into the story behind the American Civil Liberties Union’s decision to pursue a privacy right argument on birth control, rape, sexual harassment, and gay rights.

Initially, Dr. Wheeler spends considerable time on the personal lives of the ACLU founders. And frankly, the men of the ACLU do not come off very well.

She also gives the reader insight into how the ACLU founders’ personal predilections influenced the legal decisions they made in the early 20th century. She observes, “Many ACLU leaders practiced ‘casual nudism.’” This presents an interesting sidenote underscoriing the organization’s involvement in various sexual issues.

Many men who helped found the ACLU, including Roger Baldwin, Elmer Rice, and Wolcott H. Pitkin, Jr., exhibited boorish and condescending behavior toward the women in their lives. Their beliefs about individual freedom permeated their sexual and personal relationships. Elmer Rice, for example, believed that “any limits on his relations with other women would violate his freedom and ‘individual sovereignty.’”

As Dr. Wheeler puts it, “In many ways, their private lives became laboratories for experimenting with sexual civil liberties.”

The women come across, in some respects, as long suffering and weepy. At the same time, however, activists like Mary Ware Dennett and Elizabeth Gurley Flynn realized they could not be in “sexually free relationships” without reliable birth control. Their experiences caused many of them to hitch up their bustles and move forward by demanding the ACLU defend birth control activists and literature.

Thus ACLU took up the banner of women’s rights by pursuing birth control. Most people living today forget that use of birth control was a criminal offense in many states. And many people thought it was immoral.

Dr. Wheeler’s discussion of the Catholic Church’s influence on the birth control debate is particularly telling. One need only look at the Church’s opposition to including birth control coverage in health insurance under Obamacare to understand the failure of that institution to support the rights of women to control their bodies.

As Dr. Wheeler reminds us, until the 1965 Supreme Court decision in Griswold v. Connecticut, there was no constitutional right to use birth control. This case created the “right of privacy” currently under attack on various fronts.

In a slap of irony, author Wheeler also notes that Herbert Monte Levy, the ACLU’s legal director, argued there was no constitutional privacy right just two years before the Supreme Court issued the Griswold decision.

How Sex Became a Civil Liberty also reveals the personal side of the ACLU. This is not an organization comprised of people in lockstep with a shared or specific mindset, rather they reflect the idiosyncrasies, biases, and prejudices of talented, intelligent, well-educated people. As a result, the ACLU has not always taken the lead on important issues. At times its internal disagreements prevented it from presenting a unified public voice. For example, according to the author there were sharp disagreements between the women and men in the ACLU about what sexual liberties should look like.

This book is not just about sex. One of the most interesting sections deals with the ACLU’s argument that people have a “right to read” under the First Amendment. U.S. Postmasters and other public officials were engaged in a campaign of censorship to remove books from the marketplace because they found them immoral. The ACLU argued that the American public has a right “to enjoy the free exchange of ideas . . . without official interference.”

One of the book’s highlights is how those opposed to a privacy right are now using the ACLU’s arguments to promote their own anti-privacy agenda, forcing us to reconsider whether the right to privacy is as simplistic as it seems on the surface.

Timely and well written, this book introduces the reader to the story of how Americans gained a right to privacy under the United States Constitution. Dr. Wheeler wields a pointed pen at the internal debates the ACLU undertook to arrive at its unique observation: that everyone living in the United States has the right, under the Constitution, to be free of government interference in the most personal aspects of our lives.

Individual liberty is fragile and easily compromised. Those who wish to turn back to what they believe was a simpler and better time refuse to accept the notion that people are capable of making their own decisions.

How Sex Became a Civil Liberty is a really good book giving us an insider’s look into an organization whose sole stated purpose is to protect, preserve, and defend the Bill of Rights. Who can argue with those protections? Apparently many. As such, the ACLU’s work is not yet done.