How to Pronounce Knife: Stories 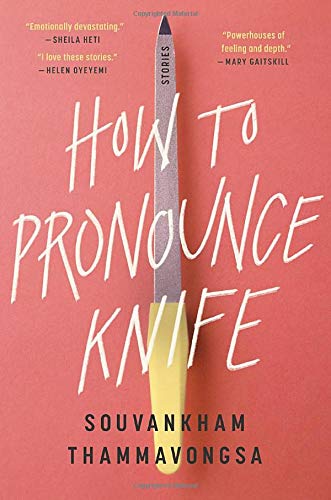 “Thammavongsa says vital things about the immigrant experience: how refugees strive to fit in and yet retain cultural traditions; how race is entwined with class; and how family is, in the end, all we have.”

A phoneme is a single sound, the smallest unit of language. But the way a phoneme is pronounced can contain a world of information about a speaker’s race, nationality and social status. The title story of How to Pronounce Knife hinges on the pronunciation of the silent k. It’s an authorial trick that serves as a motif for how immigrants navigate their way through a strange new language and, with it, a strange new culture. This navigation is the theme of Souvankham Thammavongsa’s fine collection of short stories.

Thammavongsa, author of four poetry books, was born in a Laos refugee camp in Thailand in 1978. When she was still a child, a couple sponsored her family’s move to Canada, where she grew up. She arrived to literacy late, and would state in an interview “I never read stories about people like my parents.” This, her fiction debut, is all about people like her parents.

The majority of the stories concern family life in an unnamed North American city told from the perspective of a Laotian child or adolescent. Mothers and fathers are prominent, the former usually strong, the latter often flaky or absent. (Thammavongsa’s own father worked all hours. He also couldn’t pronounce knife correctly or understand why the word began with k.) The adults, caught between worlds, struggle to negotiate the new culture while hanging onto the old ways. Their kids view them with a mixture of adoration and acute embarrassment.

As with the k in knife, language is a frequent source of confusion and humor. The story “Chick-A-Chee!” is about a strange North American Halloween ritual. The foul-mouthed tirades of some of the Laotian characters are comical and just a little “off,” as if to show how the English language as rendered by these newcomers is a clunky tool they haven’t quite mastered.

The other big theme of the book is work. Everyone’s hustling. The jobs are tedious and low-paying, and sometimes bizarre. In “Picking Worms,” the narrator’s mother does just that, working the night shift at a hog farm. In “Mani Pedi,” a failed boxer finds redemption working in a nail salon. We follow the paths of school bus drivers, gas station attendants, furniture removers, and poultry plant workers. In these stories, making a living is synonymous with making a life.

The writing is bare and unadorned, and the author’s roots as a poet are hardly visible. But the prose works. It’s direct, transparent, and leavened with a sly humor that stems from the reader’s insider knowledge of things that confuse the hapless characters. In one story a Laotian child is playing “it” but doesn’t know what “it” stands for and is bemused when the other kids keep running away from her.

Despite its fertile thematic territory and easy style, the collection is uneven. A few of the stories are little more than vignettes that never quite achieve friction or epiphany. The author gets her vitality and tension from writing about the clash of Laotian and western cultures, and the stories that depart from this milieu lose their drive. But at her best—in the title story, and in “Randy Travis” and “Picking Worms”—Thammavongsa says vital things about the immigrant experience: how refugees strive to fit in and yet retain cultural traditions; how race is entwined with class; and how family is, in the end, all we have.