How Old Is the Universe? 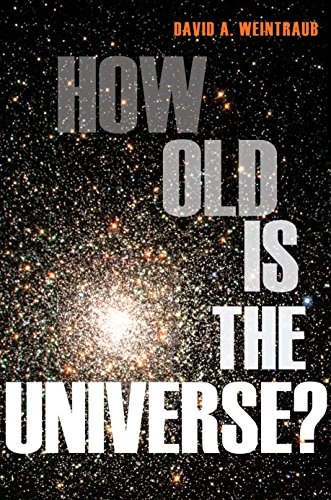 The exact age of our universe is one of the biggest mysteries—if not THE biggest—that we can imagine. The question has occupied philosophers and scientists for millennia, but only in the last handful of centuries have we had the tools to hunt for the answer.

How Old Is the Universe? by David A. Weintraub, a professor of astronomy at Vanderbilt University, presents a bracing, detailed, and surprisingly math-free look at how astronomers have managed to figure out that the universe is around 13.7 billion years old.

Not surprisingly, the journey to that answer parallels the history of modern astronomy itself. How do we determine the ages of things? It helps to start with those closest to us—our own planet, our moon, our solar system—and work our way outward from there.

Based on radioisotope dating of rocks (from Earth, the moon, and meteorites), we’ve learned the Earth is around 4.5 billion years old. That jives with the apparent age of our Sun, based on what we know about nuclear fusion, the reaction that powers stars and creates heavier elements out of hydrogen.

From there, we can start looking at other stars. Mr. Weintraub leads readers into a look at how astronomers use the light from stars to figure out how far away they are—which affects how bright they appear—and from that, their age and stellar life cycles in general. White dwarf stars, the coolest and faintest stars we can see, are some of the oldest objects in space. Astronomers clock them at around 12.5–14 billions years old. But in the early 20th century, a surprising discovery changed even that yardstick.

Astronomer Edwin Hubble published data that showed the universe was expanding; not only that, but the fuzzy stars scientists had been calling “nebulae” were actually agglomerations of billions of stars themselves: galaxies. Unsurprisingly, this raised even more questions about the universe’s age and its origins.

From measuring distances to various galaxies, astronomers have come up with an age of 13.7 billion years—but the more recent discovery of the existence of mysterious dark matter and dark energy have raised even more questions.

If and when we manage to come to terms with cosmic “particles of darkness” like WIMPS (Weakly Interacting Massive Particles) and MACHOS (Massive Compact Halo Objects), it’s likely we’ll also have a new value for the universe’s age, as well as a new understanding of space itself and our place in it.

Mr. Weintraub’s stimulating mix of history and pure science will be an excellent introduction to the topic for intrepid readers from any background.