How to Kill Your Best Friend 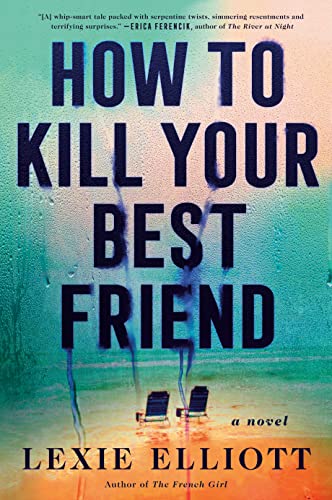 “How to Kill Your Best Friend by Lexie Elliott is an engaging read and will keep readers guessing and racing to turn the page at every twist—a thrilling and suspenseful journey well worth taking.”

Georgie, Lissa, and Bronwyn were best friends at university, bound together through their shared experience on the college swim team. Now almost 20 years later, the friends, along with fellow swim team members Adam and Duncan, are pulled back together by tragedy: the death of one of their own. Lissa was lost at sea trying to swim the treacherous waters of Kanu Cove.

The friends gather in the tropics for Lissa’s memorial service. Georgie is the most reluctant participant. She has avoided the group for the last few years, not attending the planned swimming holidays like the others have. She has distanced herself for her own wellbeing, recognizing that being around her friends brings out aspects of her nature that are best left buried. But Georgie can’t ignore the loss of her best friend and joins her friends at the lush tropical resort that Lissa and her husband Jem owned near Kanu Cove where tragic accident occurred.

Georgie and Bronwyn soon realize there’s more to Lissa’s death than they first believed. After witnessing the turbulent currents of Kanu Cove, they can’t imagine that Lissa would attempt to swim there, especially at night. The idea that Lissa committed suicide seems unlikely. She was the emotionally strongest of the three, and her personality bound them together. So was she murdered or is there something darker and more mysterious at work, perhaps the fabled serpent rumored to patrol the depths of the Cove? As the locals say: “Kanu takes. Takes who wants taken.”

The story is told shifting between Georgie and Bronwyn’s points of view, and the tension escalates for both of them throughout as secrets buried in their past are brought to the surface.

Georgie is a complex character trying to move forward with her life, conflicted by the realization that there are aspects of those friendships she needs to distance herself from and the desire to cling to her past and the relationships she has made with her fellow swimmers, mainly Adam with whom she struggles against the desire of becoming romantically involved.

Bronwyn is a mother of two who is content with her life and hopes that the secrets that come to light during their search for the truth do not destroy the happiness that she has found in her marriage.

The suspicions surrounding Lissa’s death are further heightened when Bronwyn has a message written on her bathroom mirror: “It’s your fault Bitch,” and Georgie is handed a mysterious envelope full of pages each saying: “Follow the money.” When it comes to light that Bronwyn received funds illegally transferred into her accounts, Georgie wonders whether even Bronwyn may have something to hide.

As Bronwyn and Georgie look for the answers, their search exposes the cracks in their long-time friendships and the dark secret from their past that keeps each suspicious of the other’s involvement in Lissa death. The complications and emotional distress of their shared history is brought to light as one of them contemplates, through anonymous snippets, the idea of how to kill your best friend.

“It’s just like they say: it’s not the murder that’s the problem; it’s getting away with it. No, wait. The murder is a problem too.”

How to Kill Your Best Friend by Lexie Elliott is an engaging read and will keep readers guessing and racing to turn the page at every twist—a thrilling and suspenseful journey well worth taking.