How to Flirt with a Naked Werewolf 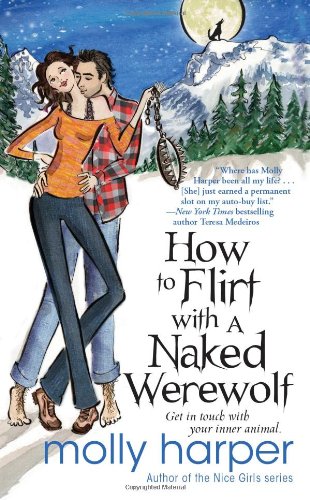 What would you do if a naked man with a bear trap on his ankle showed up on your doorstep? Well, if you were Mo Wenstein, the protagonist of How to Flirt with a Naked Werewolf, you’d let him in and help him out . . . and then sneak a peek at his package when he’s asleep.

Like much of Molly Harper’s books, How to Flirt with a Naked Werewolf features a cast of quirky characters from Abner, the old flirt; to Evie, the co-owner of the Glacier, and part of a “deadline” of the werewolf clan—as well as a romantic plot with plenty of sex. This is typical paranormal chick lit.

Mo was raised in Mississippi by über hippy parents (her real name is a string of nontraditional names starting with Moonflower) and practically ran to Alaska to get away from them—especially her overbearing mother who throws away her junk food and replaces it with organic, ecologically friendly fare.

In the small town of Grundy, where’s she’s rented (with an option to buy) a cabin, Mo makes friends with the owners of The Glacier, the local restaurant/bar hangout, and ends up with a job as cook when Buzz, the co-owner and cook accidentally slices into his own hand.

But there’s this strange wolf hanging out around her place. And that same wolf manages to rescue Mo from a trucker who tries to rob The Glacier. Not long after, the aforementioned naked man shows up on her doorstep, and she discovers the one man who seems to hate her is a werewolf—who kind of likes her.

Ms. Harper’s take on werewolves is reminiscent of those you find in Gail Garriger’s Alexia Terabotti novels—only brought into contemporary times and lacking the royalty element. The Terabotti novels take place in an alternate 19th century England, whereas Harper’s take place in modern-day Alaska; however, in both worlds werewolves live in packs lead by an alpha male. In both worlds, male werewolves tend to be handsome and highly sexual. And, in both worlds, female alphas exist, but are rare. Another commonality between the two writing styles is a quirky, headstrong female lead involved with a werewolf.

How to Flirt with a Naked Werewolf is clearly written for women who enjoy romance with a paranormal twist. The first few chapters are a little slow as it leads up to the core of the story, but they do establish three-dimensional characters that you can care about if something bad happens to them. The ending brings satisfying closure to several relationships in the book, although one does seem a little forced at the end. Overall, How to Flirt with a Naked Werewolf is a light, fun easy read, perfect for lazy days and airplane flights.