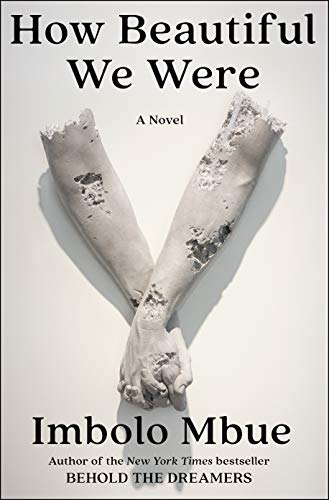 Three representatives from an international oil company are meeting with the people of a small African village whose lives are being systematically destroyed by the degradation of the environment caused by that company. The air, water, and soil have been poisoned and are killing everything that is touched by the production process. Babies and children lead the list of victims.

The village gets very little income from the company, it is promised changes that never come, and neither the company nor the regional or national government cares about the village or its people. At the end of this meeting, one in an endless series of meetings over several years, a potentially explosive crisis point is reached. This is the opening of How Beautiful We Were.

This is Imbolo Mbue’s second novel. Born in Limbe, Cameroon, Ms. Mbue’s award winning first novel, Behold the Dreamers, published in 2016, was a New York Times bestseller. Ms. Mbue came to the United States in her late teens and earned degrees from Rutgers and Columbia.

How Beautiful We Were lays out an all too familiar story of the ravaging of the landscape and its people, by a global oil company, in this case Pexton, with headquarters in the United States. The village being exploited and slowly destroyed is Kosawa, a small inconsequential place whose people live within a traditional culture. They love their village and are devoted to their extended families and their traditions.

The world view and values of the villagers are nurtured and maintained, and their universe does not extend much beyond the village. They are aware of an outside world but do not wish to interact with that world nor adopt its values. Unfortunately for Kosawa and its people, the modern capitalist world will not leave them alone once oil is found under their territory.

Starting with the confrontation that opens the novel, the story unfolds in two directions, moving forward and looking back, and is told through the eyes of several characters with different perspectives and across several generations. This complexity is handled deftly and, as the story unfolds, the life of a village and its values are revealed.

The principal characters are members of the same extended family, and the central figures are Thula and her mother, Sahel. Thula is close to her father, Malabo, and her uncle, Bongo. Her brother, Juba and her grandmother, Yaya, also narrate parts of the story.

“The Children” function as a Greek chorus interpreting events and driving the story forward. They also reveal elements of the cultural milieu of the village and its stark differences with that of the representatives of Pexton and others from the outside world.

There are other significant actors in the drama of the story. Christian missionaries from America have made inroads into the area, and their representatives try to assist the villagers in the fight against Pexton through The Movement for the Restoration of the Dignity of Subjugated Peoples. This development takes the story into the U.S. legal system. Pexton representatives from America play a role in the story, as does Austin, a writer for an American newspaper, who writes a series of stories on the corruption of Pexton and the destruction of Kosawa and its people.

In many ways, the most significant character is Thula, whose story is told from many points of view including her own. After her father is killed, Thula builds upon the strong sense of justice she learned from her father. She is intelligent, and her talents will lead her to modern schooling in a nearby city and, eventually, to the United States. Thula spends a decade in the United States where she learns the lessons of the civil rights movement and develops a commitment to non-violence. Simultaneously Thula becomes the leader of her age-mates in Kosawa even though she is thousands of miles away.

As Thula and her peers mature, they become more active in their opposition to Pexton, and, when Thula returns from the United States, the action becomes more intense and the pace ultimately quickens. In end, what is most striking in this novel is not the political and economic struggle, but rather the revelation of the traditions, customs, and points of view of the villagers of Kosawa. This anthropological dimension of the novel is a rich element that gives the story its depth.

How Beautiful We Were is a masterful piece of storytelling with multiple storylines crisscrossing the central tale. Ms. Mbue’s use of several principal narrators spread over four decades of time could easily have turned into an incomprehensible jumble, but her steady hand does not allow that to happen while it does require the full attention of the reader.

Not only does this novel tell the story of a village and its people, but it addresses any number of contemporary issues such as globalism, environmental destruction, feminism, and the survival of traditional languages and cultures.