The House of Worth: The Birth of Haute Couture 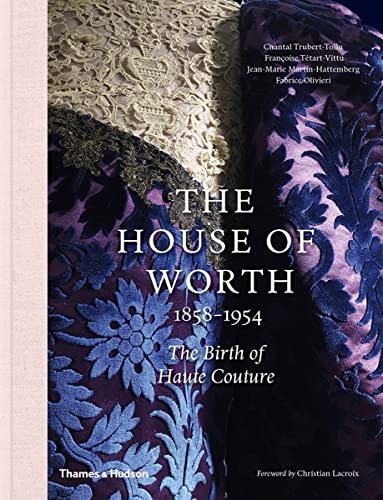 Consider this epic volume to be the last word in everything you ever wanted to know about The House of Worth and its eponymous founder as well as his descendants. The reader should be prepared to read the overwhelmingly informative text as it is an exhaustive history and chronicle of the origins of the house. We are made privy to the world of haute couture as seen from the outside looking in well as an insightful accounting of what went on behind the scenes. The story might begin with Charles Frederick Worth, but the saga continued for nearly 100 years through his progeny and their desire to keep the house alive.

“Charles Frederick Worth is universally celebrated as the ’father of haute couture.’ The sobriquet . . . is particularly apt, a touchstone for the radical transformation of the world of ladies’ dressmaking . . .”

Dedicated readers of fashion will marvel at the exquisite images and the haute couture capabilities that were so perfectly executed and revealed via sketches, paintings, and mouthwatering photographs of archival pieces.

This reader/reviewer was slack jawed when realizing the lasting influence that this designer/brand had on future generations as well as the foundation that was built for the art of haute couture. You might take notice that Worth influenced everyone from Jacques Fath, Charles James, Christian Lacroix, Giambattista Valli, and Christian Dior, as well as John Galliano’s oeuvre for Dior; frankly it’s an extraordinary accomplishment and legacy that few ever allude to.

“His was a science of frills and flounces, the too-much that’s just enough, the volumes that are extravagant, but harmonious, the exaggeration elevated into an element of style that goes beyond elegance and touches the zeitgeist.” —Christian Lacroix

What the truly perceptive and educated reader will glean from this astoundingly mesmerizing book is that Worth and family was masters of merchandising as well as prescient beyond one’s wildest imaginings. They understood the psychology behind selling; they traded on their reputation and brand as well as offering unheard of conveniences to their clientele . . . an haute couture maternity shop in their salon. Their customer service stretched to the inconceivable limits of collaborating with Cartier in order to design suitable pieces that “matched” what was contracted by their ladies.

It is worth, pun intended, mentioning again that the visuals are absolutely so much more than one might expect in that you are not only able to see the originals on forms but to see the sumptuous and unfathomable details and embellishments that were employed by this maison of haute couture. To put it in perspective, even the house of Chanel under the design direction of Karl Lagerfeld barely competes with what the house of Worth exacted in their creations.