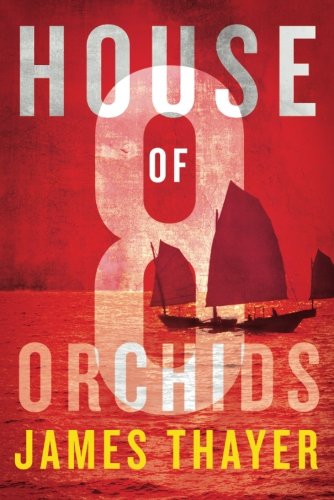 “‘My brother and I were kidnapped off a street in Chungking, China, when I was five years old . . . We never saw our father or mother again. William and I were taken to the House of Eight Orchids, and from there we never entirely escaped.’”

So begins the story of John and William Wade, sons of the American Consul to China in 1912. John is raised by as a master assassin by the Eunuch Chang, a notorious criminal in Chungking. William is trained to be a forger.

John is the eunuch’s heir, expected to one day inherit everything. His infamy is widespread; everyone knows of Yellow Hair of the House of Eight Orchids, the foreign devil from the House of Eunuch Chang.  Chinese believe in him; foreigners call him a myth.

“‘The Office of Naval Intelligence says there is no Yellow Hair . . . but the Kuomintang Intelligence Liaison Office assures that Yellow Hair exists . . . he is a vicious knife fighter . . . ’”

“China is crumbling, with the Nationalists, the Communists, and the Japanese warring against each other, and the Americans and British and Germans protecting their interests with gunboats and soldiers.”

In the midst of this unrest, Eunuch Chang has two plans underway.

The other plan hits closer to home. Chang is hired by an obsessed fan to kidnap a famous Chinese actress. “‘I have prints of all her films . . . I have seen The Maiden in Moonlight thirty-two times . . .  I bought her costumes from the last scene of The Banishment of Jis.’”

The girl, Tsingtao Lily, doesn’t accept abduction lightly. She attempts to seduce both John and William into helping her escape. John rebuffs her. Eunuch Chang has taught him women are a distraction, and he has listened well.

“’She gasped, her eyes wide. She had been turned away, maybe for the first time in her life.’”

William, the dreamer, the artist, isn’t so stout of heart. He and Lily are discovered at the docks attempting to board a ship. Eunuch Chang is furious, perhaps because he was once guilty of the same crime. He orders John to punish his brother. Instead, John helps William and Lily escape. Their plans go awry when the two are recaptured and sold to river pirates.

Pursued by Eunuch Chang’s men, his former friends, John begins the greatest and most dangerous mission of his life. He has turned against his surrogate father. Eunuch Chang will punish both his disobedient “sons,” and John wants revenge, a formidable task against a man everyone fears. Yellow Hair isn’t without resources, however . . . he has his knives, he knows the countryside, he’s aware of Eunuch Chang’s weaknesses and he now has allies of his own . . . an American woman doctor, and an American gunboat patrolling the Yangtze.

He will strike Eunuch Chang where it hurts most. . . .

James Thayer’s novel is more than the story of one man’s struggle against a greater power. It’s a retelling of a part of world history not many people now living may be aware: the conflict in China during the Japanese invasion and the US’s part in that war.

John is an unusual figure, an American raised as a Chinese, a man embued with one culture while technically belonging to another. His struggles to understand his own people while comparing them to the ones with whom he has lived all his life make him as much an oddity to the Americans as he is to the Chinese.

Sometimes beautiful with its rituals and poetic place names, often cruel and deadly in its choices of retribution, the country is described from John’s POV, revealing a man believing in a certain way of life while what is happening to him at this point in his own existence belies that belief. It is brought home to John in no uncertain terms that justice for those related by blood has to be stronger than his loyalty to the man he calls father. He may never fully escape the House of Eight Orchards, but when he accepts what he now knows is inevitable, his own future is assured.