A House Built by Slaves: African American Visitors to the Lincoln White House 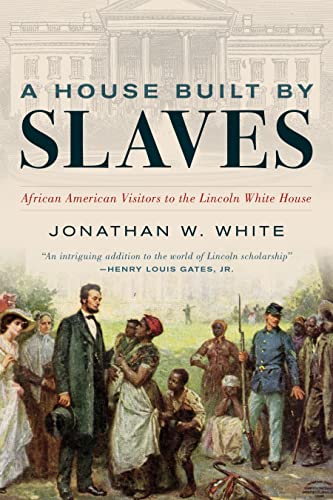 Caroline Johnson, an artist who met Lincoln said, “Mr. President I believe God has hewn you out of rock, for this great and mighty purpose. Many have been led away by bribes of gold, of silver, of presents, but you have stood firm, because God was with you, and if you are faithful to the end, he will be with you.”

Jonathan White’s A House Built by Slaves: African American Visitors to the Lincoln White House reveals a more complete picture of Lincoln through recorded visits of many African Americans, from humble stations to the intellectual elite. In the current climate of reassessing how America tells its history, A House Built by Slaves illustrates how Lincoln walked among his people as a common, flawed man and ultimately a singular purpose.

In 1816, Abraham Lincoln’s family moved to the free part of Indiana as his father was mightily disgusted with the slave trade. When he was 19 years old he and an associate barged a load of produce and other goods to New Orleans. He made it, but not before being attacked by seven local slaves, who tried to steal the load. One of the slave ships that came to port in New Orleans listed 144 slaves, 61 of whom were children 12 years of age and younger. This was how Lincoln’s perspective on the slave trade was forged.

It is well known that Lincoln represented at least 25 Black clients, but he also represented at least one slaver trader, so it appears he was pragmatic and not given completely to altruism. While Lincoln was a member of the state house, the Kansas-Nebraska Act opened up territory to slavery. Lincoln began working to change that and came face to face with the abhorrent US Supreme Court Dred-Scott decision, which held that Black persons were not fully citizens of the nation and could not sue. Lincoln’s tactic was to move to recognize human rights for all, as we do today.

White is especially instructive when he reveals the local codes, restricting the rights of Black persons, including in the District of Columbia in 1850, where Section 5 of the municipal code required, “Local authorities to provide active and efficient means to recapture fugitive slaves.” This law, was of course approved by the voters of DC whom were all white men, voting rights being denied to women and those who were deemed not white enough.

The real stars of this peek at the Lincoln White House campaign and his service are through the Black Americans who spoke with him, including Daniel Alexander Payne. Payne was born to a free Black family in Charleston, South Carolina, was orphaned at age ten, and was raised by relatives. In 1828 he opened a school for Black children but was forced to close it because South Carolina criminalized the education of Black children.

Later, some entrepreneurial Black men, John Johnson and Alexander Crummell, became interested in the D.C. Emancipation Act, which offered $100,000 to colonize Haiti or Liberia with American slaves who wished to leave the country. Johnson was an early settler in Liberia when he sailed with his family to Monrovia in 1853. Racism existed among Black people as well; when Johnson was asked whether the offer of colonization applied to both northern free Blacks as well as slaves, he opined, “the southern [slave] was inferior and incapable of taking care of itself, and if they [the US government] would be capable of accepting colonization, I would compel them to accept it.”

Martin Delany, a representative from Haiti was an early guest at the White House. Democrats, who were aligned with the slavers at the time, were horrified as were a smaller number of northern Republicans that a Black man was welcomed in the White House. Delany and his entourage were, of course, more sophisticated than most of the Americans they met, speaking French, Spanish, and perfect English with manners fit for the king’s court. It makes one wonder how the tables have turned to the current configuration of the bipolar United States with Democrats pro-integration and Republicans originalists.

Frederick Douglass, who was very famous at that time, publishing the Douglas Monthly, called Lincoln “the abolitionist’s most powerful enemy.” But a year after the Emancipation Proclamation was signed, Douglass and other Black dignitaries attended a reception at the White House where he proclaimed, “the president received him as one gentleman ought to receive another.” Three short years before these Black men would not have been allowed to enter the White House.

Alexander Thomas Augusta, a physician who was the first Black officer in the army, a major in fact, experienced frequent discrimination despite his rank; in one particularly odious occurrence a teenager ripped his epaulets from his uniform, and the conductor on the train did nothing as others assaulted him. He went on to lead the “contraband” hospital, a demeaning term given to former slaves. Major Augusta is buried at Arlington National Cemetery, at Lincoln’s insistence, the first Black man to receive this honor.

Creoles from New Orleans wanted to distinguish themselves from slaves and drafted a petition addressed to Lincoln and Congress to grant voting rights to all free Blacks born before the rebellion.

Lincoln managed to keep the Union together and the north was victorious over the Confederacy. A massive procession of African Americans wound through D.C. to Henry McNeal Turner’s Israel Church on Capitol Hill where Turner proclaimed, “Lincoln had demolished the cornerstone of the Confederacy by the blow struck January 1, 1863 [the ratification of the Emancipation Proclamation].” All men are created equal, but women would have to wait for the vote for many years.

Booker T. Washington said his first recollection of Abraham Lincoln was waking up with his mother on the dirt floor of their cabin next to him, “praying that Abraham Lincoln might succeed and one day she and her boy might be free.”

White masterfully shows the African American communities’ efforts to influence Lincoln in obtaining full rights for their people, and his choice to use their language of the day makes for a good read. Historians and Lincoln fans will enjoy this accurate retelling of the epoch where America almost came apart at the seams.