The House of Always (A Chorus of Dragons, 4) 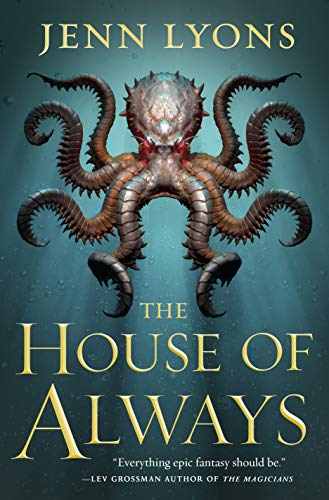 No one is innocent in the series A Chorus of Dragons. Even the protagonists in Jenn Lyons’ series have done terrible things in their pasts, killing, betraying, and abandoning others. The books are characterized by moral ambiguity, with characters often wondering if they’re on the right side or if they deserve to win. In the first book, the conflict between the protagonists and the evil wizard called Relos Var seemed straightforward. As the story progressed, it became less clear whether Var was really the villain he seemed and if the gods—who had been guiding the protagonists along the way—could really be trusted.

In the fourth installment of the series, The House of Always, this moral ambiguity takes center stage. The characters are trapped in the Lighthouse, a place where no time passes for the rest of the world. Their time is running out, however, since Vol Karoth, the King of Demons, is slowly gaining access, after which he will kill them all and be free to destroy the world. The only way to fight him is to enter Vol Karoth’s mind, a virtual world where the usual rules of matter do not apply.

Vol Karoth believes that goodness is a lie, that “Everyone is a bad person if you judge them honestly,” that “love is nothing but slavery,” and that “friendship is nothing but an exchange of obligations.” To win, Vol Karoth must convince each of the protagonists that he is right.

To defeat him, they must prove that goodness and love truly exist and the world is worth preserving. The disagreement becomes a battle of memories as Vol Karoth forces them all to live through each other’s worst memories of selfishness and betrayal, and they, in turn, show him memories they consider evidence of true love and self-sacrifice.

This forces the characters to face who they are and come to terms with the consequences of what they’ve done. “Kalindra had lived her whole life thinking the ends justified the means, but if so . . . If so, then it meant failure brought no excuses. Failure made every sin and sacrifice an act of hubris.” The characters always had reasons for the choices they made, but did those reasons justify their actions? Were they good people? Was there such a thing as goodness?

Unfortunately, this narrative structure means the entire book is composed of short vignettes from the past of each of the twelve protagonists. Some of the memories follow each other in time, but many do not. The result is a fragmented tale with no clear direction the reader can follow or anticipate. The novel’s scenes are simply points in an argument that it’s not clear anyone can really win. In fact, given the protagonists’ morally suspect past lives, it’s not even clear that Vol Karoth is wrong.

The other books in A Chorus of Dragons have played out on a large stage, with nations and politics and cultures and cities and gods and demons clashing in grand spectacles. Each book has contained at least one gloriously epic dragon battle, complete with plot twists and unexpected consequences. With its claustrophobic setting and fragmented storyline, The House of Always loses some of what made the previous books shine. Hopefully the fifth and last book of the series will return to its high fantasy roots and ultimately save the world with a little less moral ambiguity and a little more of the grand spectacle that has made these books a delight.