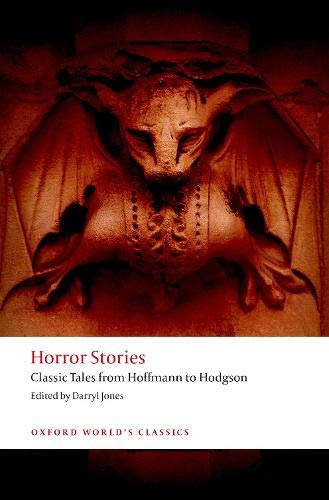 “Ghosts, elementals, demons, and even the dreaded wendigo all appear here, and most have starring roles in the best horror stories evert committed to paper.”

The words horror and terror are often used interchangeably. Darryl Jones, the editor of the mammoth Horror Stories: Classic Tales from Hoffmann to Hodgson, disagrees with using these two words like that. In his Introduction, Mr. Jones notes that: “Horror is a phobic [italics original] cultural form,” and that horror is “produced by and directly reflects cultural preoccupations, fears, and anxieties at any given moment.” And, unlike terror, which mostly seeks to shock, horror can be “highly aesthetic” and almost ethereal in its calculations of dread.

All different permutations of horror are found in Horror Stories: Classic Tales from Hoffmann to Hodgson. While the collection does favor Victorian British authors, others are well represented. Take for instance the opening tale, E. T. A. Hoffmann’s “The Sandman.” Originally published in German in 1816, “The Sandman” would go on to deeply influence Sigmund Freud and his idea of the “uncanny.” The story itself is a dreamy yarn about a wicked man haunting a sensitive character from childhood to university.

Other standout selections include Edgar Allan Poe’s “Berenice-A Tale,” Charles Dickens’s “No. 1 Branch Line: The Signal-Man,” Fitz-James O’Brien’s “What Was It?”, and Sheridan Le Fanu’s “Strange Event in the Life of Schalken the Painter.” These stories and others are frequently anthologized, and although a great editor, Jones cannot be described as adventurous when it comes to picking out horror stories.

That being said, there are some unique entries here. First of all, fans of speculative fiction might quibble with the inclusion of Emile Zola’s “The Death of Olivier Becaille,” which is a nothing less than a slightly morbid chamber drama. Ambrose Bierce’s war story “Chickamauga” is similarly hard to classify as a pure horror tale. More pleasing fare includes W. F. Harvey’s short “August Heat,” which concerns a double case of terrible coincidence; Richard Marsh’s “The Adventure of Lady Wishaw’s Hand,” which centers on a detached and murderous appendage from 14th century Scotland; and Bram Stoker’s gory revenge story, “The Squaw,” which has as one of its villains a simple house cat.

Horror Stories: Classic Tales from Hoffmann to Hodgson works as both a great introduction to Gothic horror fiction and a refresher for those who have forgotten just how good some of these stories are. Jones’s volume could easily work as a textbook for a survey course in any English department anywhere. Heck, even high school students would gladly sink their teeth into stories like W. W. Jacobs’s “The Monkey’s Paw” or Arthur Machen’s “Novel of the White Powder.”

If you find yourself alone on a cold night, then there is no better volume to curl up with than this ghastly collection of literary spooks. Ghosts, elementals, demons, and even the dreaded wendigo all appear here, and most have starring roles in the best horror stories evert committed to paper.