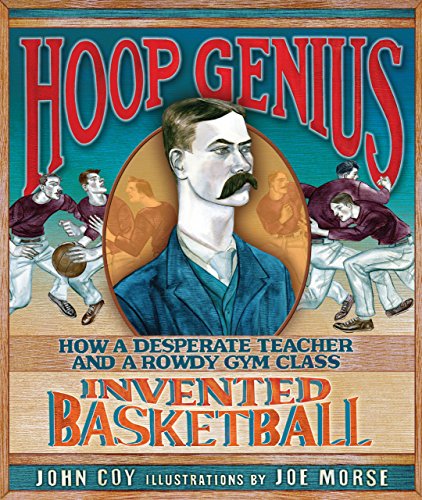 Necessity is indeed the mother of invention, and author John Coy offers a perfect example of this in his new oversized picture book Hoop Genius: How a Desperate Teacher and A Rowdy Gym Class Invented Basketball.

New teacher James Naismith has just inherited a gym class full of hooligans who bored to tears with the usual routine. Since they have already chased their previous two teachers away, Naismith must be creative to keep them under control.

Thus begins a series of gymnastic experiments including indoor football and indoor lacrosse. It is quickly discovered (and documented by notable illustrations of sore noses and sprained arms) that these rough-and-ready sports are much too violent to be played indoors, so Naismith goes back to the old drawing board.

He needs a game that will help these rowdy young men work off their abundant energy, but it must be a game that can be played inside without tackling, kicking or wrestling. What he comes up with is sheer genius: An original game with no tackling, no running with the ball and a goal that is “off the ground, requiring an arching throw.” Basketball!

Using an ordinary soccer ball and two old peach baskets with the bottoms removed, Naismith teaches his class how the ball and opponent must be handled in the game. They love it so much, they are careful not to tackle, hit, kick or wrestle, because these “fouls” will take them out of the game.

On Christmas break, the students teach their friends and family members, who teach theirs, until basketball is spreading across the country like wildfire. The game is so much fun, a group of women ask to play, and one of them goes on to become Mr. Naismith’s wife!

From cover to first pages to the very end, this book enthralls the reader and fires the imagination. Mr. Coy’s prose is factual but fun, and his ability to pack the entire evolution of basketball into a 32-page picture book is nothing less than amazing.

Award-winning artist Joe Morse’s illustrations are as fast-paced as the book’s prose. Mr. Morse graces each nostalgic page with deep bold colors and a delightful tangle of mustachioed men racing this way and that, intent on mastering this game called basketball.

This book can be a very valuable educational tool for physical education, social studies, and history teachers alike. It can be used to fuel the imaginations of young inventors, innovators, and creative thinkers, as well as for supplemental reading in early American history classes. Even parents with young writers in their families can use this book as an inspiration for jotting down one’s thoughts and organizing them into something useful.