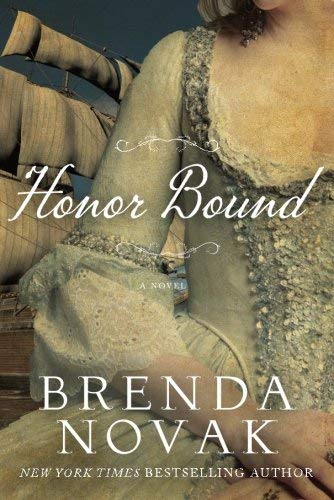 “It’s possible that Ms. Novak intended Honor Bound as an homage to the traditions of the 1980s bodice-rippers that propelled romantic fiction to the popularity it enjoys today; however, as the novel has been published in late 2011, reading Honor Bound is like falling out of the cliché tree and hitting every branch on the way down.”

In her introduction to this digital-first release, Brenda Novak recounts the story of her first sale—a historical novel—and its subsequent failure to be issued due to publishing politics. Ms. Novak then started a long-running and very successful career in contemporary romantic suspense. But she always wanted to write another historical novel. Honor Bound is the result of such ambitions.

Jeannette, the very young daughter of a displaced French aristocrat, marries to save her family from the discomfort of destitution. Her new husband is very rich, very powerful, very old, and very creepy. Just minutes before he joins her to consummate their marriage, Jeannette discovers that he is impotent, and in order to beget an heir is inviting a number of other men to share their marriage bed.

As a gently brought up lady, Jeannette is naturally horrified and flees, intending to make it to London and throw herself at the mercy of her uncle.

At the nearby seaside village, Jeannette takes shelter from the rain by the hearth at a pub. There she overhears a table full of sailors discuss their next sea voyage—to London—which happens to be leaving first thing in the morning. Knowing she will make it to London faster this way, and that no one would think of looking for her aboard a frigate, she decides to disguise herself as a young boy and go aboard as a new ship’s recruit.

Along the way, she meets Lieutenant Treynor, our eponymous bastard, who has had a hard life, but is working to pull himself up by his bootstraps through military ranks until he gets his own command. He is well respected among both his superiors and his men, but his shadowy past threatens to undermine his hard work. Protecting a runaway bride will only make things worse, but Treynor’s innate honor will not allow him to do anything but his utmost to save Jeannette from the matrimonial fate that clearly terrifies her.

It’s possible that Ms. Novak intended Honor Bound as an homage to the traditions of the 1980s bodice-rippers that propelled romantic fiction to the popularity it enjoys today; however, as the novel has been published in late 2011, reading  Honor Bound is like falling out of the cliché tree and hitting every branch on the way down.

The novels written in the 1980s were done so from a completely different political and social background, one where women’s sexual freedom was still occupying an uneasy position between idealism and reality, and men were not only men, they were men with all the manliness that this implies. Gender equality came into the equation as the power a woman could bear by making a man love her, not by any power that she might actually wield herself. It wasn’t uncommon for the hero to use force on the heroine to submit her to his will physically—particularly if she began to affect his emotional side.

Her sexuality is also an issue, with the 1980s heroine being swept away by passion, not knowing what is happening, even with a man who has treated her poorly and shamed her. He rouses her sexual interest, then blames her for it, using her sexuality against her. It is common for the heroine to be mistaken for a whore—and for her to enjoy that interaction, without any understanding of her body, her desire, or her self.

But historical romance has come a long way, (baby), and these tropes are now not only rarely used, many are also uncomfortable for modern readers.

And herein lies the uneasiness permeating this novel. There have been successful homages to this period, and Ms. Novak certainly creates a big story with plenty of drama against a backdrop of war, revolution, class discrepancy, sea battles, military tradition, and, of course, inappropriate romance.

She also creates a heroine that, in many ways, bucks the trend. Jeannette is very young, but she is extremely resourceful. She makes plans and while they do not necessarily come in to fruition the way she intends, they are not ridiculous or, to put it bluntly, stupid. She displays inner strength and courage in a tangible way, and rescues herself on many occasions instead of waiting helplessly for the hero to come along.

Yet when creating an homage—particularly from an era where reader sensitivity to power dichotomies is high versus an era when severe power dichotomies were expected—it may be best to aim for a tone or theme rather than concrete traditions. In particular, the sexual brutality faced by the heroine (not necessarily on the part of the hero, though he certainly treats her body—and her—with less respect than is strictly heroic), and the inadequate balancing of the resolution (that is, the hero still holds much of the power over the heroine at the end, and his love for her does not convincingly level the playing field) may disturb some readers. Others will be put off by the over-the-top clichés—the heroine even has violet eyes.

In the end, whether a reader enjoys this novel or not may come down to whether Ms. Novak can tap into enough of the reader’s nostalgia to gloss over the well-trod path she follows. Otherwise, this novel will fall flat—and be dated before it even hits the shelves.