Home Sweet Anywhere: How We Sold Our House, Created a New Life, and Saw the World 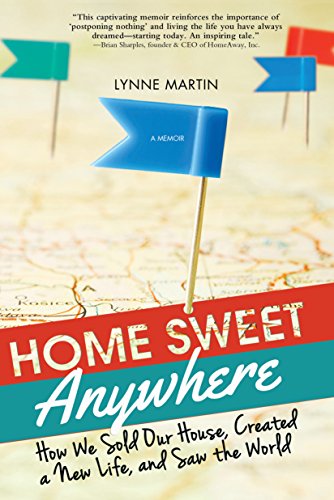 “Because of their bold decision to wander the globe in search of adventure, ‘We are healthier, happier, and more in touch with our world and our own selves.’”

Have you ever wanted to chuck it all? Just ditch the house, humdrum, and responsibilities of everyday life and travel the world? In 2011 that’s exactly what Lynne Martin and her husband Tim did. In Home Sweet Anywhere: How We Sold Our House, Created a New Life, and Saw the World the author reveals what led to her drastic change in lifestyle and how it has changed her.

But this is no tale of 20-something backpackers wandering the globe. The Martins had just hit 70 and are retired. They decided they wanted to experience the world before their “wheels fall off.”

Lynne and Tim were lovers as young adults but drifted apart and went on to create fulfilling lives with others. By a quirk of fate they found themselves together again in their 60s, each now available. It didn’t take long for the sparks to fly, and they were married.

Yet as Lynne approached her 70th birthday Martin wasn’t satisfied with the status quo. With some trepidation she broached the subject to Tim of wanting more out of her life, about wanting to explore the world. She feared he’d think she wasn’t satisfied with their new marriage, but his response shocked her, “Oh my God, we’re on the same page! I’ve been thinking the exact same things for months, but I was afraid you’d think I lost my mind.” Thus started their plan to “unretire.” What made it possible was the realization that they could live just as cheaply on the road as they did at home.

So began the marathon business of shutting down their lives: selling the house, getting rid of their “THINGS,” and, the most dreaded task of all: telling their children. Would the kids think they had gone loco?  Fortunately their four daughters supported their decision.

Once they had cleaned up their lives for the adventure they now had to plan what to do with their newfound freedom. Tim spent hours in front of the computer finding apartments and travel deals, finally organizing the first six months. They’d take two side trips to Argentina and Mexico, before boarding a repositioning cruise (cheaper fares) from Florida to Rome.

Mexico was an adventure as the intrepid Tim tried his hand at bullfighting, he figured since one of the other participants was holding a baby in his arms as he swung the red cape at the bull, how dangerous could it be? Tim avoided the fate of another fellow who was headbutted in the groin by the bull and emerged from the corrida with his body intact and his pride swelling.

But after a few rough experiences in Argentina they started to question their decision. Martin wondered, “Maybe we’re too set in our ways and too old to be out here living in the world.”

They spoke with a local about their plight who explained that the problems they were having were easily explained and just due to some miscommunications. They realized they “needed to let go of any assumptions or expectations we had and change our perspective.” In other words, go with the flow. After that they slid easily into the particular rhythms of long term travel.

With this newfound knowledge they headed to Europe, starting out in Istanbul where they ventured off the well-trodden tourist path and loved it. In Paris they realized that if they “were going to be true citizens of the world, then we needed to leave our expectations at home in that 10 x 15 storage unit and learn to be more adaptable.”

The author writes in an engaging, descriptive style that makes the reader feel s/he’s been invited along for the journey. And what a journey it has been. Home Sweet Anywhere covers their adventures in 10 countries.

But the book is not just about travel, it’s about embracing the life you have and living it to the fullest, that just because you’re retired, settling down doesn’t mean having to settle for what you have. Lynne looks at their life before and notes, “While not unhappy, we were bored. Old age and ennui curled under the doors and around the windows.”

Martin notes that traveling long term has immersed them in other cultures, “We aren’t tourists at all. We are temporary locals, wherever we choose to park our suitcases. And now that we are ‘home free,’ home is wherever we are.”

Because of their bold decision to wander the globe in search of adventure, “We are healthier, happier, and more in touch with our world and our own selves.” Lynne’s top piece of advice for those contemplating their own home free adventure is “postpone nothing.” As a 70-something traveler she knows of what she speaks.

Michael Milne first became a travel writer after selling everything, traveling around the world for a year with his wife, and then chronicling the journey in a series of articles entitled “A Year and a World” in the Philadelphia Inquirer. His writing has also been published by National Geographic and several other publications. He is currently a member of the International Food, Wine and Travel Writers Association and New York Travel Writers Society.