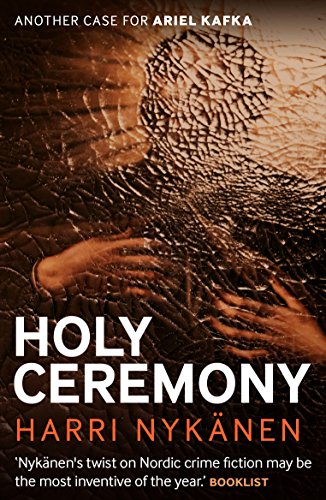 A woman’s nude body is found in a Helsinki apartment with religious references scrawled on her back. Police Lieutenant Ariel Kafka of the Violent Crime Unit soon discovers that the body was stolen from the morgue and left in the apartment to attract the attention of the police. A personal message to Kafka is discovered when they turn the body over.

When the same body is stolen a second time and burned in a bonfire in the woods, Kafka finds himself in the middle of a deepening mystery involving past sexual assault at Daybreak Academy, a boy’s boarding school with religious sponsorship. A secret society formed by past students called the Christian Brotherhood of the Sacred Vault seems to hold the key to the mystery of the stolen body and to several unsolved murders linked to the school.

Harri Nykänen is a veteran Finnish crime fiction author who worked for 20 years as a crime reporter for Helsingin Sanomat, the largest daily newspaper in Scandinavia. He has published more than 30 novels, and Holy Ceremony is the third novel in his Ariel Kafka series.

The series is noteworthy in part because Kafka is a Jew, a relative rarity in Finland and even more rare in Finnish law enforcement (there are two). Nykänen focuses on Kafka’s cultural heritage more extensively in earlier novels; in Holy Ceremony references to it are minimal, highlighted primarily by an ethnic slur directed toward Kafka by one of his detectives. As he reflects, “There was as much prejudice and anti-Semitism on the force as there was among the public at large . . . Still, it felt like I had just been slapped across the face.”

More noteworthy in Holy Ceremony is that Kafka is a well-drawn, interesting, and likeable protagonist. “I didn’t ask for much from life,” he tells us. “A one-bedroom apartment, comfortable furniture, a good stereo . . . and a four-figure sum in my bank account were enough for me.”

Nykänen’s first-person narrative brings Kafka close to the reader without larding down the story with excessive analysis of his state of mind. It also presents the action as a police procedural with a nice balance of investigative detail, interactive team members, and legal explanations.

We’re able to follow the action and appreciate Kafka’s dealings with senior officials, members of the National Bureau of Investigation, and the deputy national police commissioner without feeling overwhelmed with information and background.

Nykänen’s writing style is clean, direct, and unadorned. As with Michael Connelly, his skill with words seems to have been well-honed through years of experience as a journalist. He describes with economy whatever is necessary to paint the scene and leaves the rest to the active imaginations of his readers. Dialogue is realistic, and point of view is controlled with the discipline of a veteran.

The translation by Kristian London should also be commended as transparent and effortless to read.

Scandinavian noir is an enduring subgenre in contemporary crime fiction, and we’re constantly made aware by North American publishers of the latest English translation of novels from Nesbø, Läckberg, or Sigurđardóttir. Harri Nykänen, on the other hand, has more or less flown under the radar to this point. Perhaps his Ariel Kafka series, and Holy Ceremony in particular, should begin to attract the attention Nykänen deserves in this hemisphere of the crime fiction world.