Hitler's Pawn: The Boy Assassin and the Holocaust 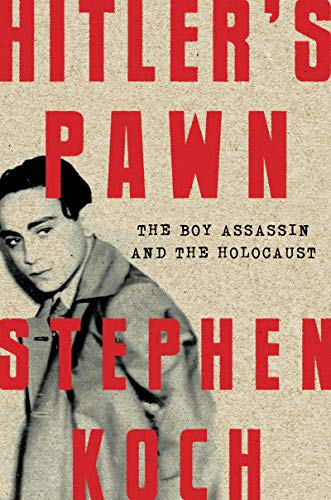 "’While he seethed, the big world seethed around him. War was imminent. He was powerless. He was nobody. Nothing—no money, nor influence, nor status . . .’ Consumed with rage, Herschel contemplated either suicide or murder. Then he bought a gun.”

With one rash, foolish, fearless act, an impoverished, insignificant, and immature 17-year-old young man plunged the Nazis into the worst anti-Semitic act of the 20th century.

Thus begins the remarkable story of Herschel Grynszpan, a Polish-born Jew, living in France in 1938. He learned that his parents, along with 17,000 other Polish Jews, had suddenly become deported from Germany to Poland. They remained stateless in a no-man's land. "A decree of May 2, 1938 established what was interpreted as draconian rules for excluding new refugees and expelling or imprisoning those already in the country."

Alone and unguided, he wanted to send a message of protest to the world. By nature headstrong and ill-tempered, he felt prompted to express his outrage. "Though he had been the victim of anti-Semitism all his life, he now began to develop a new intellectual grasp on it." He devoured the Jewish newspapers of Paris, learning about their daily accounts of persecutions of his people.

"While he seethed, the big world seethed around him. War was imminent. He was powerless. He was nobody. Nothing—no money, nor influence, nor status . . ." Consumed with rage, Herschel contemplated either suicide or murder. Then he bought a gun.

On November 7, 1938, Herschel marched into the unguarded German Embassy in Paris. He asked to see an official and was guided into an office. He pulled out his gun and shot the first man he met. He had shot a low-grade official. Ironically, Ernst von Rath, who died a few days later, may have been anti-Nazi.

When the news of the assassination reached Goebbels, Hitler's minister of Propaganda, he saw this as his great opportunity. Goebbels was a fanatic. "By 1938, his anti-Semitism was second to none . . . He was the proponent of the 'Big Lie,' and became one of the greatest propagandists of the 20th Century." He convinced Hitler that Grynszpan was the tool of "Word Jewry," plotting to create a war between France and Germany. Herschel must be put on trial, and the Jews of Germany utterly punished.

On November 9, 1938, a great wave of anti-Semitic terror was unleashed on the Jews of Germany and Austria. It became known as "Kristallnacht" (The Night of Broken Glass). Police and Nazi hooligans committed widespread acts of arson, looting of Jewish homes and businesses, murders, and arrests. The ultimate irony was that the Jews were forced to pay a ransom for the clean up. Every Jew in Germany was held hostage in the name of Herschel Grynszpan. "The German regime had revealed itself as a criminal regime, a sponsor of mass incarceration, the purpose of which was theft and exile . . . It had embarked on the course of state-sponsored criminality that would become the Holocaust."

Meanwhile, Herschel was captured in France by the Germans and taken to Berlin. Goebbels and Hitler saw their chance to create a show trial of the century. Not surprisingly, Herschel received special treatment because they wanted him to stand trial in his best physical condition. The trial was to prove that the Jews had evil plans for Germany. It would create sympathy and worldwide attention for the Nazi cause.

For a short period, after the fall of France, Herschel had the opportunity to escape, but didn't take it. Instead, he wanted to confront his opponents with an invented story that would disprove the notion of a Jewish plot. He would falsely plea that there had been a homosexual affair between himself and Ernst von Rath. He shot von Rath because he owed Herschel money and was slow to pay. The Nazi plans for the great show trial of "World Jewry" fell apart when they learned of this new development and believed that Herschel would use this concocted story as his defense. (To this day, there are people who have accepted this story as true). "The great anti-Semitic show trial . . . had been called off through the maneuvers of one insignificant but clever Jewish boy. A child. A lying but shrewd child, using a 'typically Jewish' trick." Unfortunately, Herschel never found out that he had stopped the trial.

Herschel Grynszpan must have been an enigma to Hitler and Goebbels. Was he a hero or a fool or both? Was he manic depressive? Was he in a manic state when he shot von Rath? Would Kristallnacht have occurred if there had not been a Herschel Grynszpan?

This book reads like a thriller. The author has brought in extensive research, including the shameful behavior of the French judicial authorities, which may shock the reader. It's written for both scholars of the Holocaust and for laypersons interested in this little-known chapter of Holocaust literature.

Carol Katz has been a librarian and archivist at Montreal’s Jewish Public Library and an archivist at the Montreal Holocaust Memorial Centre. She also contributed to Judaism From a Woman’s Perspective: A Collection of Meaningful Essays Encompassing Judaism’s Philosophy, Law, History and Mysticism, Volume 2 and Mizmor L’David Anthology, Volume 1: The Shoah.