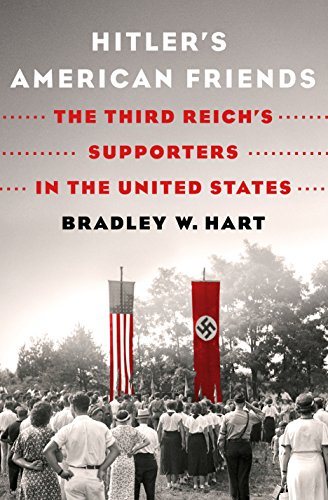 Many Americans were shocked last year to watch neo-Nazis marching and chanting racist profanity in the streets of Charlottesville, Virginia. Their nighttime procession carrying torches and bellowing vile slogans seemed right out of Nuremberg in the 1930s. How could that possibly be happening in the United States of America?

Bradley W. Hart, a professor at California State University in Fresno, provides part of the answer. In a well-written and well-researched new book, Hart relates the stories of American groups and leaders who marched the streets of our cities in the 1930s to prepare the nation for Hitler’s triumphant arrival. America has always had an alt-right fringe of bigots and racists ready when called upon to return their distorted view of “greatness” to the United States.

As war neared in Europe in the 1930s, Hitler’s friends in America sought to keep the United States out of the war and leave England alone to fight the Nazi juggernaut after the Wehrmacht had quickly conquered France. Many in this country saw isolation and neutrality as the best strategy.

In addition, America had long had its share of virulent anti-Semites and hate organizations that were able to spread domestic terrorism. The hooded and cross-burning Klu Klux Klan joined with these new Nazi groups to serve Hitler’s purposes. The advent of the Third Reich in 1933 had emboldened these organizations, each of which wanted to take the lead on the American domestic front. Fortunately, they rarely coordinated their activities.

Hart systematically describes the German-American Bund, the Silver Legion, radio preachers such as Father Coughlin and others. The Bund held huge rallies filling arenas like Madison Square Garden. Uniformed members of the Silver Legion marched through cities and towns, proud of their mission to emulate Hitler’s followers on these shores. Priests like Father John Coughlin spread their abhorrent anti-Semitic doctrine and commanded a large nationwide radio audience.

All these groups that Hart describes had self-chosen leaders seeking to imitate Hitler in their own circles. Their leadership of these hate groups was quite incompetent. None of these organizations became a mass political movement. Federal and state police forces monitored their activities which, in the end, came to nothing.

Nonetheless, the active hate organizations represented only a small cohort of the American citizens who espoused the belief that Jews controlled global business and that blacks were an inferior species. There were many who did not participate in these organizations who shared their distorted views. With the advent of World War II, these groups began to fade away—or so we thought.

As might be expected, among Hitler’s American “friends” there were politicians and other operatives. For the most part, they made sure that pro-German propaganda was widely distributed. Hart explains how the German embassy in Washington assisted in this effort. American businessmen—in particular, vehicle manufacturers, oil providers and Coca Cola—saw unlimited opportunity for profits in doing business with Hitler. Some, like Henry Ford, discovered in Hitler a person who paralleled his views on the Jewish menace. Others simply saw commerce with the Third Reich as a source of wealth.

The Nazi regime attempted to attract American students as potential “friends.” Exchange programs brought young men to Deutschland where they were indoctrinated. Returning to their home campuses, these young zealots spread Nazi propaganda. Once again, the “friends” could not overcome the majority American public opinion as Germany prepared for the war it would start in Central and Western Europe.

Ultimately, the “America First” movement led by national hero Charles Lindbergh commanded the greatest public attention as a friend of the Nazis. America First combined members of the earlier organizations and enjoyed widespread public approval as a result of Lindbergh’s active involvement.

When neo-Nazis marched through the streets of Charlottesville in 2017 and killed a counter-protester the following day, the nation was awakened to the present-day internal threat that has long been part of the American landscape. When our president equated the neo-Nazis with the protesters who opposed them, the real internal risk to the country became irrefutable. Would the federal government act with resolve to eliminate these hate mongers from our midst?

Hart’s new book raises issues that are not limited to history. The streak in the American psyche for authoritarianism and racism is evident today. Hart’s Hitler’s American Friends should serve as a useful reminder of the calamity we must avoid.