With Hitler and Mussolini: Memoirs of a Nazi Interpreter 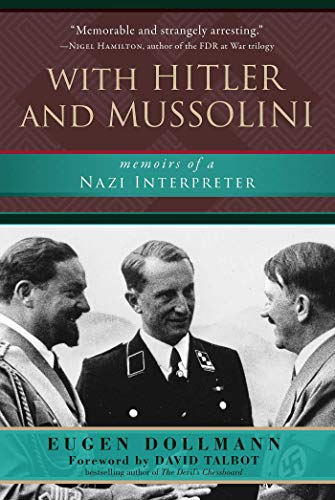 There have been many instances where one wishes one could have been a fly on the wall in order to know what was said at the time or what really happened, particularly, say, in the commission of a crime. In the case of this publication, that’s not quite so.

In spite of the title, this is as much a remembrance of what the author said or did in his early adult life as it is his presence with respect to interpreting for Hitler, Mussolini, Himmler, and other notable figures of the overall World War II era.

Previously published and translated from German, Skyhorse Publishing has re-issued this with a foreword by David Talbot, author of two previous books of diplomatic and political nonfiction. This foreword provides personal background information and context on Dollmann who, as it turns out, was not the Nazi that everyone thought in spite of his party membership and holding rank in Heinrich Himmler’s notorious SS.

Indeed, Dollmann was a German art historian whose interest in the 16th and 17th centuries and original intention was to write a biography of the so-called “Great Cardinal,” Alessandro Farnese (1534–1589). Though the biography was never written, it did place Dollmann, with his fluency in Italian, in a perfect position to become the go-between for influential German and Italian political figures right through the end of the war.

His position and standing were such that he also had a hand in negotiating the surrender of German military forces in Italy at the end of April, 1945, in conjunction with the Americans, led by Allen Dulles of the Office of Strategic Services (OSS) and later director of the CIA.

As a Nazi, Dollmann’s oxymoronic homosexuality necessitated his staying in the closet, considering Germany’s legal proscription of the present day “alternate lifestyle.” He could have easily ended up a victim in one of the many concentration camps, yet there is no discussion or mention of his sexual orientation in the text.

Much of what is in the text, particularly between the principals in the title, is a recounting by the author. There are no verbatim transcripts of conversations, just the author’s interpretation of the event or meeting although Dollmann does quote from letters and diary entries of other figures, such as Mussolini’s one-time foreign minister and son-in-law Galeazzo Ciano.

The text does provide behind-the-scenes looks at female personalities such as Hitler’s paramour and eventual wife Eva Braun, ladies of the Italian nobility, Hitler’s visit to Italy in 1938, and the attempt on his life in 1944, many internal Italian and international political intrigues and the events surrounding the end of Mussolini’s regime, subsequent rescue from arrest, creation of a social republic in Northern Italy and his death at the hands of Communist partisans in Milan.

Unfortunately, the book ends as Dollmann takes a train to Switzerland to negotiate the Germans’ surrender at the end of the war, so there is no account of that event. One would be interested to know the extent of his participation that involved the end of fighting with some 800,000 Germans laying down their arms.

Told in a conversational style, there is much here of interest, but then also other of Dollmann’s experiences tend to be personal and of a trivial nature to the point where there might be no interest on the part of the reader. Overall, one should not really look for anything especially eye-opening of which nothing is previously known; just Dollmann’s specific participation in and take on the events that went on around him.

As a memoir, there are no notes, just a somewhat brief index. The photographic section includes some shots that may not have been seen previously by many but obviously are of famous personalities and events mentioned in the text with Dollmann himself in many of them.

Although a relatively obscure Nazi official, Eugen Dollmann was in a position to experience much of what would otherwise not be seen or known by the public in general histories of the era. The importance of this memoir is that it is primary source material, and Dollmann was a link between the two main European members of the Axis and privy to much of what went on outside of the public eye and knowledge.