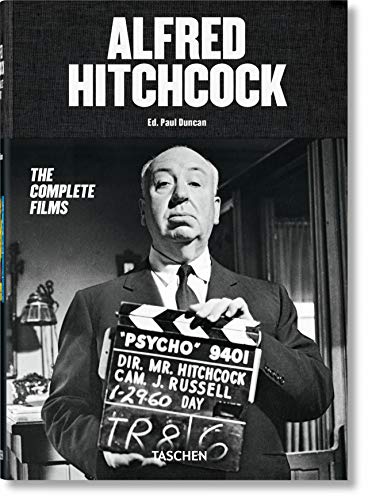 “Nearly 40 years after his death, Hitchcock still is a formidable influence on today’s movie aesthetics, a factor Paul Duncan emphasizes on every page of this book.”

As a fledgling film director in his native England, Alfred Hitchcock and his peers periodically held bull sessions they dubbed "The Hate Club." Conversation revolved around the miseries of the film industry. One momentous night, the question came up: Who do we make our films for? Hitchcock surprised everyone with a straightforward answer: the press. If the critics liked a picture, he argued, audiences would follow suit.

He was right. Film critics loved his movies, as did audiences. His films featured such major stars as Cary Grant, James Stewart, Grace Kelly, and Kim Novak, but the real reason audiences returned to the theater time and again was to see Alfred Hitchcock at work. His genius behind the camera, a riveting combination of stunning visuals, meticulous storytelling, and subtle allusions to the erotic subconscious of his characters earned Hitchcock his well-deserved title “The Master of Suspense.” As a director, his name entered the lexicon of film grammar to interpret complex suspense films: Hitchcockian. Over the years cinephiles have written reams of commentary, analysis, and critical studies of his work.

Now we have a new work, Alfred Hitchcock: The Complete Films, edited by Paul Duncan, a film historian with impressive talents as a producer of numerous movie books including volumes on Charlie Chaplin, Ingmar Bergman, and the Star Wars films among others. While this new work isn't a groundbreaking study of Hitchcock (that honor goes to Francois Truffaut’s invaluable series of interviews with the director published in a single volume as Hitchcock/Truffaut) Duncan’s photo-heavy book is a welcome addition to the voluminous Hitchcock library.

Duncan structures the book with a series of essays, introducing Hitchcock via his biography and then tracing the director film by film throughout his illustrious career. Hitchcock got his start in the British film industry, designing title cards for silent pictures. He worked his way up the artistic chain to assistant director, and finally took his place in the director’s chair with the 1922 two-reel short Number 13.

In 1924 he and wife Alma Reville (Hitchcock’s largely uncredited lifetime collaborator) went to Berlin’s Ufa Studios, where they absorbed the visual techniques of German Expressionist masters Fritz Lang and F. W. Murnau. Hitchcock was fascinated by all the aesthetic and technical elements of assembling a film, from script to design to camera angles.

In essence, Hitchcock viewed a director’s job as that of an orchestra conductor, combining all the elements of cinema to construct a singular vision. His first few movies were workmanlike but gradually Hitchcock developed an unparalleled talent for gripping suspense films.

Duncan excels at pointing out recurring ideas throughout Hitchcock's films, most notably in the acrophobic terrors of Saboteur, Vertigo, Rear Window, and North by Northwest. But Duncan also picks up on the more subtle elements of the motifs, such as the underlying fear of falling within Psycho when Martin Balsam stumbles backward in a clumsy ballet while he is repeatedly stabbed by Mother Bates.

Though Alfred Hitchcock: The Complete Films doesn’t break new ground in Hitchcock studies, the book's photo heavy design shows us both on-screen and behind the scenes action film by film throughout Hitchcock’s 55-year career. The glossy pages feature both black and white and color illustrations with some of Hitchcock's (and audience) favorites like Grant, Stewart, and Kelly, as well as the occasional Hitchcock star ranging from Joan Fontaine (Oscar winner in Hitchcock’s first American film, Rebecca), Ingrid Bergman, and Bruce Dern, star of Hitchcock's last film Family Plot.

Some of the pictures have the power to shock, not just the expected moments such as stills from the iconic shower scene in Psycho, but also a hideous closeup of Barbara Leigh-Hunt after she has been brutally raped and strangled in Frenzy, Hitchcock's second to last and most disturbing work. Candid production photos give a unique glimpse of the director at work with his cast and crew. Hitchcock is often seen with an arm and forefinger thrusting forward, driving his collaborators to give their all.

There's also a delightful appendix with a film-by-film inventory of the director’s cameo appearances—a trademark and audience pleaser in any Hitchcock film. Alfred Hitchcock: The Complete Films is capped with an invaluable resource in its rich bibliography. While not for the casual fan or a film scholar looking for new interpretations, this is still a solid book for anyone interested in Hitchcock’s enormous output. Nearly 40 years after his death, Hitchcock still is a formidable influence on today’s movie aesthetics, a factor Paul Duncan emphasizes on every page of this book.