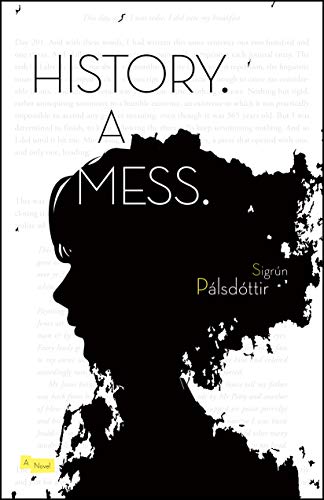 “‘. . . in today’s historiography, where the focus on the individual is once again becoming stronger, it’s actually better for a forgotten artist to have been a woman than a man. What used to work against the artist has become her success.’”

The premise of this novel is wonderfully intriguing: An unnamed Icelandic scholar of Art History has made a thrilling, and surprising discovery: the artist who painted a famous 17th century portrait of an English nobleman was in fact a woman. It’s a revelation that promises to launch a brilliant academic career. As her mother remarks, “in today’s historiography, where the focus on the individual is once again becoming stronger, it’s actually better for a forgotten artist to have been a woman than a man. What used to work against the artist has become her success.”

But just as she’s preparing to hand in the final draft of her thesis, she rechecks a detail in the 400-year-old journal that has been a primary research source, and she notices a problem:

“I found the page immediately and swiftly scanned the text. But something wasn’t right, I couldn’t find the sentence. In fact, there was nothing I recognized in the text, nothing I understood at a glance. I soon realized that this was not the same text I had transcribed. It was one page earlier. In other words, there were two entries with the same number.”

It turns out that the page on which she has based her claim was actually two pages stuck together, and separating them reveals that the painter was, as originally assumed, a man. It is a discovery that throws the protagonist into a frenzy of uncertainty about what to do, and gives rise to the self-doubts and low self esteem that she has tried to suppress. With whom, if anyone, should she share her error? Should she revise her research or simply keep the distressing revelation to herself?

With its questions about the role of truth, good faith, and academia, the novel enacts relevant, even urgent concerns. Yet the execution here is problematic. Rather than explore the implications at the heart of the scholar’s dilemma, the novel devotes a good deal of its focus to the more psychological, at times even mundane, details of her story.

Though it may indeed be appealing, particularly in our current cultural climate, to think of history as a mess, the mess in question seems to relate more to the protagonist’s psyche. As the chapters jump, semi stream-of-consciousness style, from dreams to memories, from observations about relatives, friends, and neighbors to the protagonist’s own inner dialogue, a hazy portrait emerges of a woman full of insecurities, anxieties, and unresolved issues with the people in her life. Ultimately, instead of being a novel of ideas, the book turns its narrative attention on the inner world of its main character.

It is possible that the difficulties in reading the text are related to the quality of the translation. Sentences such as: “Is it a question about whether the vantage you look from matters?” or “There are wooden planks above me, but the scant brightness that now slips into the room prevents me from believing for a moment that I am enclosed inside a coffin,” or “And as you’ve no doubt seen for yourself, there is no coincidence who transforms into whom.” do not flow smoothly, and perhaps make the text more dense and enigmatic than the original.

Yet there are aspects of the novel that are nonetheless entertaining and authentic. Palsdottir does an admirable job of portraying the subtleties and dynamics of group interactions, whether at a family party or a weekend at the cottage with female friends. In these scenes, the author gives brief but telling glimpses into the lives of her characters, and in doing so, much that is obscure and unclear in the narrative shifts into sharp focus as the individuals suddenly come alive on the page and the realities that shape their lives come into view.

The central quandary posed by the story is ultimately resolved in a way that is satisfying, but also very troubling. It is a conclusion that bears consideration as it raises questions about the whole enterprise of historical claims, and the moral responsibility of those who claim hegemony over historical truth.