High Financier: The Lives and Time of Siegmund Warburg 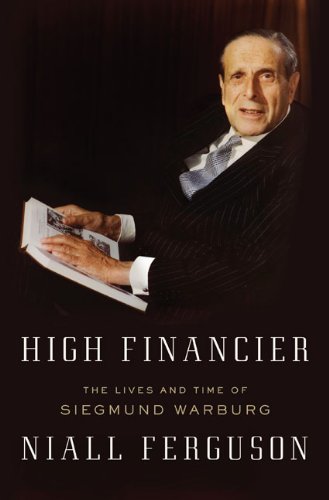 For all the dyspepsia induced by the Great Recession, Niall Ferguson, one of our best economic historians, has offered us a tonic: a biography not of a dealer, trader, or hedger, but rather a banker who fulfilled the pride and duty such a title once conferred.

Ferguson gives us the life of Siegmund Warburg, the cerebral, fiercely ambitious German Jew with haute banque in his blood, who fled from Hitler in the 1930s and after World War II launched his own merchant bank in the City of London (the equivalent of our Wall Street).

Though not quite as famous as the Rothschild clan, Warburg is widely credited with having transformed the City. He was described by James Wolfensohn, one-time president of the World Bank, as “the new global banker for modern times.” Warburg raised merchant banking—finance concerned with foreign corporate investing, overseas real estate investment, and international trade facilitation—to a new level and set the stage not just for economic innovations but for Europe’s post-war recovery.

More importantly, Warburg launched the first hostile takeover bid when he masterminded the acquisition of the British Aluminium Company in 1958. He also invented the Eurobond market, which was a major breakthrough in the history of European integration—though one largely unforeseen by the statesmen of that era.

Born into a banking family, Warburg was not a shoo-in to join the family business. Originally intending to enter German politics, he apprenticed in European and American outposts of the Warburg company. He was relatively swift to recognize the evil of Nazism, and left Germany long before the Third Reich met its fate.

Though grateful to England for the opportunities it afforded him—he was knighted in 1966—Warburg never warmed to its elite classes, particularly those members who worked in the City.  “One of the dominant attitudes in the City is tolerance towards mediocrity,” he noted in the mid-1950s, adding that most of his fellow financiers would prefer wishful thinking, leisurely business practices, and conflict avoidance.

Warburg did not precisely know how London would escape its fusty, insular nature as a financial center, but he was convinced it had to happen. It did, with his own merchant bank leading the way. As he wrote early in his career, he regarded his firm “not as an instrument for making money, but as an important and constructive part of . . . the world economy and community.”

However, for all we learn about Warburg, he is ultimately a mystery, as complex a figure as a Washington or Lincoln. Almost anything that could be said about Warburg, the opposite was also true. He was full of virtues, yet at the end of the day as opaque as a Mandarin. He considered himself an ascetic but had an affair with the Russian ballerina Danilova. However, Ferguson is no Kitty Kelly (there are small blessings in this world) and High Financier is not the book a reader seeking breathless scandal and tabloid drama will find easy.

That being said, Ferguson might have better tipped the scale from research to narrative with some of his set pieces, such as Warburg’s founding of the Eurobond market and particularly the battle over British Aluminium; nothing wrong with laying out some basic background about the company and its executives, especially Viscount Portal, who led the Royal Air Force during World War II and was reputedly Churchill’s favorite military adviser.

This is but small beer.  Nearly every chapter of High Financier forces us to consider the sour fruits of our subprime, collateralized-debt harvest. If, as the rubric goes, we get the leaders we deserve, it is doubly true for our financiers and bankers. Whereas Warburg’s wide reading, geopolitical views, and emphasis on relationships drove him to the highest levels of stewardship, our own trading culture has created a national keno parlor.

If anything, to offer a book about a banker, even in less restive times, is audacious enough. Moneymen are not the stuff of heroic legend: They don’t lead armies, discover cures, or entertain the masses (unless you enjoy Congressional hearings); you will not hear a trumpet cadenza when a letter of credit is signed.

Yet there is little we can do without them. They may or may not be too big to fail, but they are necessary in any case. The good ones, like Warburg, are the shepherds of resources, allowing people and societies to flourish. Without them, we have only our mattresses under which to bank our cash.

And in this era of Blankfein, Mack, and Fuld (traders, not bankers, and the heads of the firms that helped precipitate our current crisis) the “great man” biography is welcome. However, there is much that future Fergusons can teach us about those who move the economy in smaller ways, who fiercely embody the keen relationship between individual and economic freedoms.

For though we can appreciate Warburg’s accomplishments, our markets and community are equally galvanized by their humbler makers, say, a Honduran woman who each day pushes a shopping basket laden with Latin delicacies baked the night before onto a 6:00 A.M. subway, traveling an hour to a Manhattan greenmarket to sell a tamale, empanada, or quesadilla for two dollars apiece. Could a master writer of economic history do well by her?

She’s at that market today, an aspiring Warburg, and the answer is “yes.”