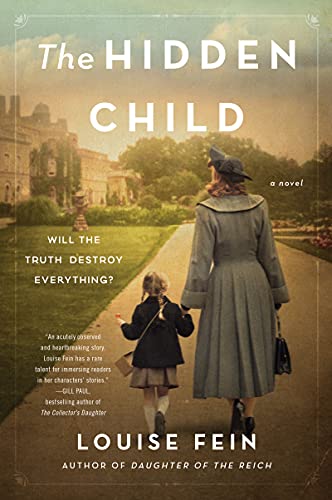 “The Hidden Child raises the disturbing question: How many of these fictitious people would have cheered Hitler on?”

Louise Fein’s debut novel, Daughter of the Reich, was a straightforward Holocaust story about a forbidden romance between a Nazi officer’s daughter and her longtime Jewish friend. With her new novel, The Hidden Child, Fein has taken an interesting sideways look at one of the underpinnings of Nazism—eugenics—among British adherents in the 1920s, with less dramatic but more original results.

Thus, Edward is working with American and British politicians, educators, and other luminaries, including a son of Charles Darwin, to try to pass a law that would institutionalize, sterilize, and limit education for “undesirable” people with “a propensity to alcoholism, criminality, sexual inversion, weak-mindedness, violence, epilepsy, depression, sexual deviation—you name it.”

His wife, Eleanor, another of the book’s narrators, shares Edward’s beliefs. In large part, that’s because her mother was murdered years ago by a man who would be defined as “feeble-minded” by eugenicists.

Indeed, Eleanor and Edward’s idyllic life on their country estate with their adorable four-year-old daughter, Mabel, seems like happy proof of the eugenics theory.

But Edward’s core values are threatened when Mabel is diagnosed with epilepsy, a condition that he claims is a sign of “undesirable” heredity. As Mabel gags on the disgusting medicine forced into her mouth—“howling, shaking, coughing, and spluttering”—Edward glares at Eleanor, “fury flashing like she’d never seen before in his eyes.”

He insists that Mabel must be sent away to a Dickensian institution.

The novel’s third narrator is the epilepsy itself, a daring tactic that mostly works but becomes overused. “You still think you can get the better of me. But I know you can’t,” this narrator warns.

The plot is largely absorbing, although most of the twists are foreseeable from early on. There’s also a bit too much preaching about both epilepsy and eugenics.

The real challenge for Fein (a British lawyer whose daughter was diagnosed with epilepsy at age two) is how to get readers to care about characters who are proto-fascists and advocates of a creepy, racist worldview.

It’s an easier job with Eleanor, who is less devoted to eugenics and more devoted to Mabel. The book would have been more interesting if Edward were more complex and had more redeeming qualities from the start.

Within the context of the novel, Edward and his colleagues are aware of the Nazi Party’s interest in their theories in Germany. Between the lines, The Hidden Child raises the disturbing question: How many of these fictitious people would have cheered Hitler on?