Hidden and Visible Realms: Early Medieval Chinese Tales of the Supernatural and the Fantastic (Translations From the Asian Classics) 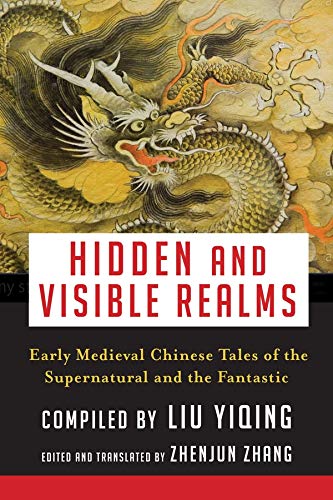 “Hidden and Visible Realms does make for pleasurable and fast reading. This is the perfect book for enthusiasts of Chinese literature and those interested in East Asian folklore.”

Genre bending is hot right not now, but it is not new at all. Indeed, the stories collected in Hidden and Visible Realms, most of which date back to the period in Chinese history known as the Six Dynasties (220–589), are not easy to categorize. One school of thought believes that these zhiguai portfolios are best understood as pure fiction. After all, how else would someone characterize stories concerning women turning into cats, men almost marrying were-otters, and dream journeys that mess with the human understanding of time. This view says that the men who wrote the stories and the men who read them understood that it was all made up.

Professor Zhenjun Zhang, the editor and translator of this medieval collection, believes that zhiguai are closer to the ancient Chinese art of historiography. For Liu Yiqing, the bureaucrat and artist who recorded, compiled, or edited the vast majority of the stories contained in this book, these tales are fantastic, but no less true. Some attempt to explain how local military leaders attained their great wealth and status, while others explain how some of those same men came to ruin.

Hidden and Visible Realms presents a catalog of sometimes chilling, sometimes romantic zhiguai stories from a time when China was divided between several kingdoms. As Professor Zhang notes in the introduction, the Six Dynasties period was a time of artistic flourishing and a time when Confucian thought was the norm among the Chinese elite.

However, early medieval China also saw the introduction of Buddhism from Nepal and India, and as such some of stories in this volume deal with Buddhist concepts (reincarnation, karma) and creatures (raksasas) that were alien to traditional Chinese religion.

In “Zhao Tai Travels in Hells,” we read about a concept of the underworld that combines Chinese folk customs with Buddhism and even Taoism: “The kind of transformations each person would receive [in the afterlife] followed what each had done: those who killed living creatures were said to become mayflies . . . if they were to become human beings, they would die young.” Like Dante centuries later, Zhao Tai finds a multi-layered underworld wherein punishments are meted out to the guilty.

Elsewhere, the Buddha appears as a savior. Other stories feature more common elements of Chinese folklore, including ghosts, wayward scholars, mountain beasts, and anthropomorphic gods. Magic abounds everywhere. Most of these stories are less than a page long, and as such there are 285 in this book. Many are repetitive. Hidden and Visible Realms is a scholarly book intended for an audience well versed in Chinese literature. For amateurs and new beginners, it provides excellent reference material concerning the zhiguai format.

Although not a coherent narrative, Hidden and Visible Realms does make for pleasurable and fast reading. This is the perfect book for enthusiasts of Chinese literature and those interested in East Asian folklore.