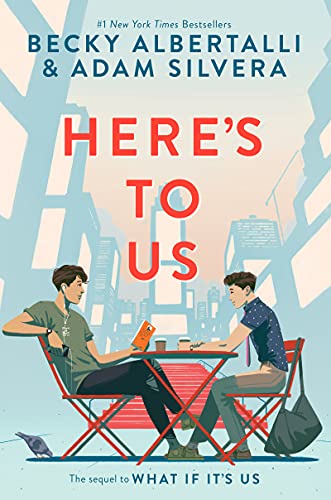 “Here’s to Us catalogs so many of the things that are weird and precious and sacred about being young people discovering who they are. The writers take teens seriously and deliver the stories they deserve.”

Writing YA books can be tricky; many adults idealize what they wish their teen experiences would have been like, rather than striving for the awkward truth, and that can lead to a story that feels a bit hollow.

Writing with a partner can be tricky; each voice should be unique, yet stand apart from the other, not to mention the logistical difficulties.

Writing a sequel to a beloved novel—you guessed it, can be tricky. Three are so many expectations to live up to, and so many people who are waiting on the edge of their seats to see what comes next.

But Becky Albertalli and Adam Silvera pull off all three tricks beautifully with Here’s to Us, the follow up to their hit book, 2019’s What If It’s Us.

In the first book, Arthur is in New York for an internship when he bumps into Ben. The two connect and start dating, but (spoiler alert) ultimately decide to end their romantic relationship when Arthur heads home at the end of the summer.

Picking up two years later in Here’s to Us, Arthur is back in New York for an internship, this time one in his dream field —theater. But he hasn’t told Ben he’s back. They’ve drifted apart despite vowing to remain friends, and things are a little weird now. Plus, Arthur has a new boyfriend who makes him extremely happy, thank you very much.

Meanwhile, Ben is feeling stuck. He’s working for his dad at a drugstore, taking classes he doesn’t particularly like, and is head over heels for a boy who doesn’t care to label their relationship. And when he happens to see on social media that Arthur is heading back to the city, he feels a lurch that he can’t define.

There’s a reason Albertalli and Silvera are as popular as they are; they write characters that make your heart sing. Being back with Ben and Arthur is such a welcome experience, but being reconnected with the side characters provides levels of joy as well.

Ben’s never-shuts-up best friend Dylan is up to something, and his girlfriend Samantha is just along for the ride. Arthur and Ben’s new love interests, Mikey and Mario, respectively, aren’t just there to enrich the main characters. They become people the reader cares about as well.

The first book would be solidly classified as YA, but this one feels a bit more mature in the characters and the writing and feels perfectly slotted into the new adult genre. There are still feelings of angst and being misunderstood, but it comes from a more developed standpoint. Albertalli and Silvera should be credited for letting their characters grow and become slightly different people than they were when first introduced.

So much of early adulthood is defined by endings and beginnings, and the authors deftly capture the confusion that comes with discovering that what you want may be at odds with ideas that other people have for you—whether it’s a relationship, a job or any kind of prospective plans, the uncertainty can be paralyzing. Ben and Arthur are both at a crossroads in their lives in regard to each other, but in a larger sense, in regard to figuring out what they want for their futures.

The feelings of safety and security they find with each other are so well illustrated, and this just affirms their bond. They desperately need a home base to cling to throughout the upheavals thrown at them through this book, and they find themselves drawn together again and again.

Here’s to Us catalogs so many of the things that are weird and precious and sacred about being young people discovering who they are. The writers take teens seriously and deliver the stories they deserve.