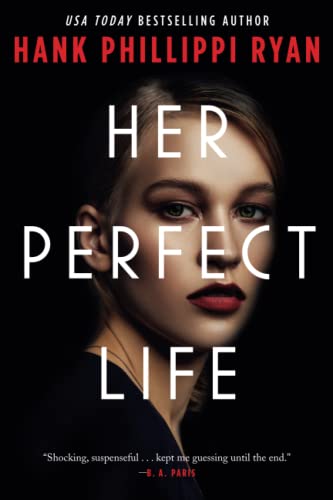 “Ryan once again shows her flair for spinning, from a life similar to her own, a set of intense and spiraling threats, with more than one devilish intent behind the scenes, and only the narrowest chance for a safe resolution.”

A stand-alone from Hank Phillippi Ryan is a frank invitation into suspense, a thriller from the start. Her Perfect Life pushes this premise from the first page, with the unexplained and now long-ago disappearance of Cassie, beloved older sister to Lily Atwood, a TV news star.

Framing Lily as an investigative reporter is a clever wave from the author’s own career, where she has earned some 37 Emmy awards. But the novel twists the ambiance from the start, as Lily’s most intimate teammate is her producer Greer, and Greer’s first-person admissions of jealousy and manipulation set the tension ramping.

Greer’s not a serious threat to Lily as the book opens—her own career depends too intimately on feeding the star machine that makes Lily widely recognized and adored. (There’s a strong whiff of Martha Stewart here.) But Lily has isolated the disappearance of her sister, as a family secret not easily noticed. And when Greer gets a chance to take power and control through discovering Lily’s vulnerability, the fight’s on. Only Lily doesn’t realize it yet, and her seven-year-old daughter Rowen is likely to be the first one wounded in the battle.

The book twists rapidly among the characters, showcasing several points of view. Lily’s first clue that somethin’sg wrong is when Greer appears to vanish, and a detective storms the production office, demanding answers: “Did she tell you where she was going? What her plans were for last night? Who she was with?”

Although Lily catches the flaws in the questions—“This guy was off, totally off. He didn’t act like a cop, even an incompetent cop”—she sets her own reservations aside and begins a cascade of poor decisions that put herself and her child at increasing risk.

And that’s the flaw of the story: If Lily’s smart, she’s performing entirely out of character. If she’s as naive and foolish as her choices suggest, then how can she transform within the space of a day or two, to make the save?

If you enjoy banging your head against the wall while protagonists create dreadful situations through folly, and trade good sense for high suspense, then Her Perfect Life will fit the bill. Ryan twists an intricate set of motives and actions, gives the reader a fair chance at guessing the true culprit(s), and keeps the pace dramatic and well weighted with consequences. Life in the public eye? Costs of social media? Exposure on Instagram? Ryan once again shows her flair for spinning, from a life similar to her own, a set of intense and spiraling threats, with more than one devilish intent behind the scenes, and only the narrowest chance for a safe resolution.