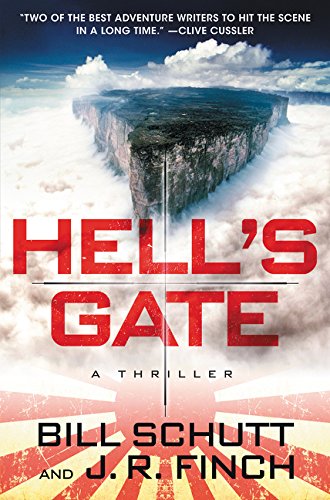 “[the authors] incorporate fact with fiction so effectively and so seamlessly that fans of thrillers will never trust again that the stories they read could not happen.”

Bill Schutt and J. R. Finch combine science and history to create a horrifying scenario that might have ended the Second World War with an Axis victory. Hell’s Gate is a spellbinding read for fans of Cussler and Clancy.

In 1944, when Germany and Japan face certain defeat, United States Army Intelligence discovers a 300 hundred-foot Japanese submarine abandoned in a river in the mostly unexplored rain forest of Central Brazil. What is a Japanese submarine doing in the Brazilian rain forest, and more importantly, what was it carrying?

A platoon of Army Rangers goes looking for answers, but they don’t return with answers. In fact, they never return at all.

At that point the Army turns to zoologist Captain R. J. MacCready. R. J. has completed several dangerous missions during the war, but he is grappling with both grief and guilt over the deaths of his mother and his adopted sister while he was on a mission. “If only I hadn’t been overseas when my family needed me most.”

In one of the little-known historical facts the authors include that gives their thriller a depth of meaning not usually found in the genre, is the reason behind R. J.’s depression.

During WWII, besides the forced relocation of those with Japanese and Italian ancestors on the west coast, American citizens with German ancestors who lived on the east coast were facing their own loss of civil rights. “Ostensibly in the name of “protecting children,” some newly empowered faction of new York’s wartime bureaucracy decreed that any American child adopted into the family of a German-American should be returned to its “natural” family.”

Although burdened by his grief and bitter at the circumstances surrounding his loss, R. J. is not turning his back on his country as one might expect. R. J. is aware of the horrors being perpetrated by the Axis powers. “. . . the world’s a burning house now. And this one’s filled with carnivores. They’re wounded, pissed-off, and dangerous. And if we forget that—even for an instant—if we get complacent . . . we’re dead.”

A few hours later R. J. is parachuting into the Brazilian interior with orders to hook up with his old friend Bob Thorn, who is supposed to be dead but isn’t, find out what Thorn has heard from the locals, and discover “what those Axis bastards are up to” in the words of R. J.’s commanding officer, Major Patrick Hendry.

All R. J. has to do is find Chapada, a local village where Bob Thorn lives, then travel to a mist-filled valley beneath 2,000 foot cliffs, a place whose name is roughly translated as Hell’s Gate. Along the way he has to watch out for the Xavante, an indigenous tribe with a reputation for skinning their enemies alive, plus avoid all the wildlife that bites, stings, squeezes, or eats its prey—and R. J. is classified as prey. “In the forests of the night, nothing existed except life and death in nature’s extinction lottery.”

If R. J. manages to reach Hell’s Gate—and if the Germans and Japanese and whatever they brought in on that submarine are there—then he has to determine what their goal is and avoid getting captured, so he can relay the information back to Thorn, who will send it on to the Army. Such a simple mission. What could go wrong?

The first thing to go wrong is that the villagers of Chapada want to dismember him. Thorn manages to rescue him and explains to R. J. that there is something, a being of some kind called a chupacabra, a night demon, by the villagers, that is killing their livestock. R. J. knows it is also killing people, because he found a hut full of victims dead in pools of their own blood.

The Germans at the hidden base are also providing victims for the chupacabra, and the base commander, a thoroughly nasty piece of work named Colonel Gerhardt Wolff, wants to know what’s killing his men. Not that he particularly grieves, but they were his men, and no one is allowed to kill them—except maybe himself.

R. J. is certain he knows what the Chapada really are, and he learns what “those bastards” are planning. The Axis is planning to send rockets over the U.S. and drop bombs filled with such deadly poisons as anthrax. Once they learn what the chupacabra really is, they plan to develop a pathogen using it saliva, a pathogen for which there is no treatment, no cure.

Although R. J. MacCready is sometimes a little flippant in his conversation, the flippancy is not meant to be lighthearted, but to ease the tension of the horror of the plot. He is a counterpoint to Colonel Wolff, one of the more memorable villains of recent thriller fiction. It is worth noting that the colonel’s demise is rather stomach-churning, but deserved.

The descriptions of the rainforest and of the Chapada are evocative; the rainforest evokes the dangers of nature, while the Chapada evoke fear. The book includes a reality check that points out scientific and historically accurate facts upon on which the plot rests, and a bibliography for those interested in further reading about those facts.

Dr. Bill Schutt, a trained zoologist, and J. R. Finch incorporate fact with fiction so effectively and so seamlessly that fans of thrillers will never trust again that the stories they read could not happen. The implausible has suddenly become the possible.