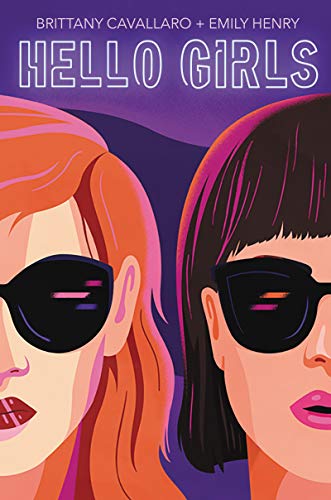 It might be easy to simply call Hello Girls a YA Thelma and Louise, but it is so much more . . . and, unfortunately, so much less than the iconic movie of female empowerment. In fact, at some points in the book it is so frustrating to watch the characters repeatedly making the same mistakes that it’s difficult not to want to yell at them to just go watch Thelma and Louise. But despite the many multigenerational pop culture references, Hello Girls’ characters seem ignorant about the one movie that might have saved them a lot of angst and tears, not to mention bloodshed.

The “girls” of the title—but don’t call them girls, they hate that—are Winona, the trophy daughter of a famous weatherman and an heiress mother whom she believes died of a drug overdose, and Lucille, daughter of an absentee father, a hard-working mother, and sister to a drug-dealing older brother who lives at home, expecting Lucille and her mom to wait on him hand and foot.

The women don’t play much of a role in the story other than to serve as cautionary tales. But the men in the story, these are the true villains: narcissistic, cruel, coercive, manipulative, greedy, selfish, violent . . . every aspect of toxic masculinity is manifested and brought to bear on our heroines. These men are, as Lucille observes, “dudes looking to put her in her place, to make her shut up so they could appreciate her better as the toy she should know herself to be.”

The early portraits of Winona and Lucille’s home lives is portrayed vividly, evoking the sense of despair and desperation that drives the characters’ need to escape at any cost. Both girls are smart, yet also naïve in their own ways, and it’s clear these two belong together, best friends to the end, wherever that might lead them.

“So,” Winona said. “I want freedom, and you want the chance to want.”

“And here we were, totally unaware that we were living in a country song,” Lucille replies.

Once they hit the road, their bad choices—at first driven by the heady intoxication of freedom, but later repeated despite both characters actually warning each other against making these stupid mistakes—escalate, often in frustrating ways, until our heroines almost willingly embrace the role of victims.

Thankfully, both Winona and Lucille have enough grit and intelligence to work together to break out of the trap they’ve created for themselves and once again escape the men who would use, abuse, and discard them without a thought.

The climax may leave readers feeling let down as two major, life-changing events are over in a blink with little to no emotional impact on either the characters or the audience. However, the overall vibe of a feel-good, girl-woman-power-road-trip is strong enough to make Hello Girls, a fun summer read.