Hell from the Heavens: The Epic Story of the USS Laffey and World War II’s Greatest Kamikaze Attack 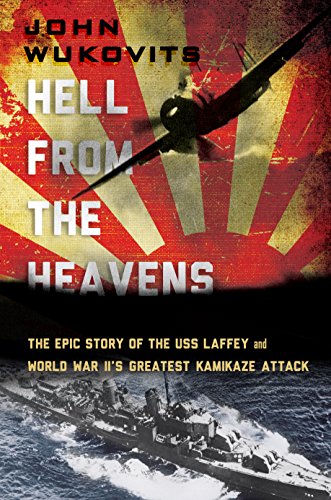 This year marks the 70th anniversary of the end of World War II. Before the unconditional surrenders of the two remaining Axis powers, there was still a lot of fighting to be done and there remains much about which to write, particularly in recounting the events and experiences of a single incident.

In this case, John Wukovits has chosen to retell the story of the United States Navy destroyer Laffey and its survival in an 80-minute battle against 22 Kamikazes on April 16, 1945, with additional context from the Japanese perspective. The author knows whereof he speaks, having previously published a similar story about the sacrifices of the destroyer escort USS Samuel B. Roberts in the Battle of Leyte Gulf during the action off Samar Island.

Indeed, the Laffey’s story is essentially a biography or history of the ship, told from the beginning. Named for a Civil War Navy Medal of Honor recipient, the ship was commissioned in February, 1944. Captained by F. Julian Becton, a combat veteran of naval battles off Guadalcanal, it was his responsibility to turn a group of mostly teenage boys into an efficient, well trained crew, prepared to enter combat.

As it turned out, the crew’s baptism of fire was Operation Overlord, D-Day, where the ship efficiently performed many duties including fire support for ground forces, screening vessels in the invasion force and anti-submarine operations. Escaping undamaged and without casualties, the Laffey escorted vessels returning to the States, underwent a refit and then prepared for the long journey to the Pacific to join the fight against the Japanese.

Upon arrival in the combat zone, the ship participated in three operations off coast of the Philippine Islands and at Iwo Jima where it was responsible for many of the same duties performed in European waters. It was at this stage that the Japanese introduced their “special attack forces,” Kamikazes, pilots who were deliberately sent on suicide missions to crash their planes into American warships.

Up to this point, the ship still had suffered no damage in combat nor had there been any casualties among the crew. Lucky was the sobriquet that was now being applied to the ship. That was about to change as the next step on the road to Tokyo was the Okinawa Campaign.

Initially, the Laffey and its crew endured three weeks of screening, anti-submarine and fire support as other destroyers in the fleet were subjected to murderous Kamikaze attacks at the various picket stations north of Okinawa; these stations were intended to provide early warning to the fleet of Japanese attackers, conventional and suicide. On Friday, 13 April, the Laffey was assigned Picket Station No.1, the most dangerous of all.

On 16 April, the Laffey’s luck ran out. The author details the action that morning in Chapters 7–9 through sub-sections under the heading of time of attack and number of attacking Kamikaze. Although most of the attackers were “splashed” by anti-aircraft fire, the ship did suffer hits from at least six planes or bombs dropped, mostly in the area of the fantail or stern and included 32 dead.

Slowly making its way back to the States for repair and overhaul, the Laffey was put on public display in Seattle so that those on the home front could see the devastation wrought in order to maintain public support for the war effort even as the War Department was planning an eventual invasion of the Japanese Home Islands. Ultimately, the ship was docked in Charleston, South Carolina, and is currently preserved as a floating museum.

Besides three appendices, there are also notes, a bibliography, an index, and a photo section of the ship in action and some of the crew members. To tell this well-researched story, the author has consulted not only individual ship action reports and war diaries but also many books, articles, newspapers, collections, oral histories, and interviews with crew and their family members. There are also two maps detailing Laffey’s Pacific operations and two diagrams of the course of the attacks on the ship.

With many of the Greatest Generation gone now (fewer than 30 of Laffey’s crew survive), it is wise and necessary that these stories be told so that current and future generations can understand the sacrifices that were made in World War II and pay tribute to those who answered the call of duty. As well, a visit to Charleston and the ship would be informative, walking the hallowed ground of a battlefield.

For a well-written story of a truly epic World War II fight, one should not hesitate with this volume. It is highly recommended.