The Heir Affair (The Royal We) 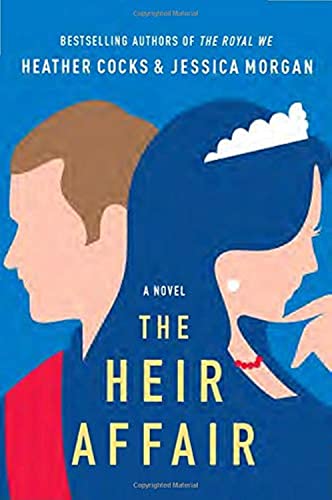 “In this case, fiction gives a much truer representation of humans behind the news than the supposedly factual media do.”

One of the many challenges of writing a series, or even just a sequel to one novel, is getting the right balance of backstory in the subsequent volume.

For readers of book 1, The Royal We, the transition should be easy to The Heir Affair, book 2. It continues from where The Royal We left off, so the main characters and their problems and foibles will be familiar, especially if you read both books close together.

For readers entering the story at The Heir Affair, however, the transition is a long clunk and stumble. The book is divided into four parts—“Acts”—and it’s not until Act 2—140 pages in—that the characters become easier to sort out and remember, and the situation starts to cohere.

Perseverance pays off, because once you’re on track the book makes sense and takes on depth and development the rest of the way through.

Nevertheless, there remains an odd, subliminal sense of disconnect caused, perhaps, by the fact there are two authors. Surely they and their editors knocked themselves out to meld their input seamlessly, but it probably needed one more round.

Even so, it’s an interesting story about what it must be like to be the contemporary British royal family, especially the heirs in line to the throne.

It’s been a long time since the saying, “The sun never sets on the British Empire” was true. Here in the 21st century, the royals are more figureheads than anything else. They may have legal powers and responsibilities unknown to and/or not understood by people outside the remnants of their dominion, but in the main the family’s roles appear to be ceremonial and their imperative is to maintain honor, dignity, and indomitability.

Immense pressure is put upon them, constantly, to conform to public expectations. The media are downright persecuting. For 24/7/365, the royal family and their associates are hounded and judged. And that is what The Heir Affair is ultimately about.

In book 1, American college student Bex from Iowa meets British prince Nick at Oxford, and they fall in love. Various troubles result. But they stick together and, in book 2, they get married with the hopes of living happily ever after. Instead, almost 500 pages of frustration and misery ensue.

“You married a man and you married a country,” the queen informs Bex. And never stops reminding Bex. Nor does anyone in the old guard, while the next generation chafes against the royal restraints.

Anyone who’s lived unburdened by them can understand the instinct to fight back, to escape. It seems like degrading captivity sometimes, and not worth any of the trappings and prestige. This makes it easy for readers to identify and sympathize with the characters.

Unfortunately, several of the characters aren’t very likable. That, of course, is subjective, and individual reader response will run the gamut. There may be a cultural and even a generational gap between those who love the characters and those who don’t. Among Bex, Nick, and their friends, the sassy, flippant dialogues, frequent trash mouth, and selfish attitudes will be relevant and hilarious to some readers, and seem disrespectful and stupid to others. At least one reader will think, “This is what the royal scepter is going to pass to? How the mighty have fallen!”

(About that trash mouth: It actually becomes meaningful midway through the story, in one of the funniest scenes in the book.)

At the same time, the novel raises strong and serious issues about the boundary lines between self and duty. Each of the principal characters struggles hard with that, and the underlying story is about how each comes to terms with it—or not.

The title relates to the plot around which the issues are woven. With the sitting queen suffering age-related health problems, the questions of who is going to take over, and when, and whether and when Bex and Nick can produce the subsequent heir, become paramount. Also, the question of whether the current spare heir, Nick’s younger brother Fred, will ever marry and produce the next generation of spare heir becomes important, too. Even more so when a question about everyone’s lineage is raised by a startling plot twist.

While all this is going on, readers get a delightful insider look at the royal facilities. At times one can’t help but wonder how the authors got in to see so much and report back. Curiously, there is no mention in the acknowledgments of any person or resources guiding the veracity of place and protocols. Is everything based on internet research and guessing? If so, it’s convincing.

The authors do make it clear where they draw the line between fiction and fact as it relates to the current royal family. A combination of accident and design led to several parallels between real-life royal dramas and those in the story. Much of the book was written before those events happened, giving it an uncanny foreshadowing and sense of true insider knowledge that isn’t really there.

Thus, royal-lovers will love The Heir Affair and its predecessor. Less-passionate fans will enjoy gaining a sense of what the life might be like. Readers not interested in the royals won’t get much from the story unless they’re looking to satisfy curiosity and want to be assured that royals are people, too. In this case, fiction gives a much truer representation of humans behind the news than the supposedly factual media do.